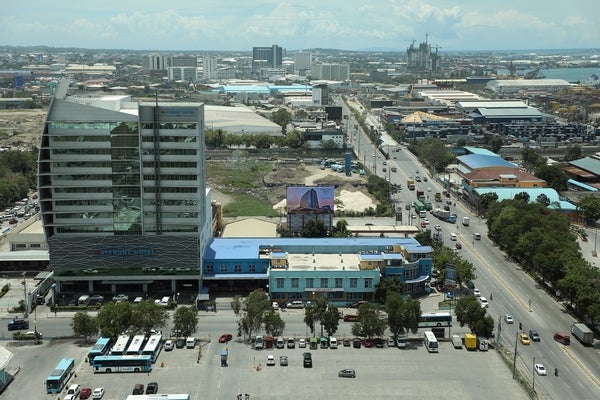 The skyline along the North Reclamation Area that straddles the cities of Cebu and Mandaue shows the fast pace of the economic growth of this part of Metro Cebu.
CDN file photo

HIGHER prices of products, a depreciating peso, and the possibility of losing tax incentives.

The business sector, both local and foreign, have to contend with these issues, with some even already saying that they are halting plans of expansion in the country.

The American Chamber of the Philippines (AmCham) recently said in a position paper that 61 percent of its member firms said the proposed second tax reform package, which seeks to “modernize and rationalize” incentives would “cause their firm to end further expansion.”

Cebu business leaders see this possible move as a blow to the country’s economy which has been facing tough competition from its neighbors in Southeast Asia.

“The halt in further expansions of foreign business firms and investors will deal a severe blow to the growing economy of Cebu because of Cebu’s heavy reliance on BPOs as a main driver of economic growth,” said Mandaue Chamber of Commerce and Industry (MCCI) Vice President for External Affairs Steven Yu.

Under the proposed second tax reform package, which is now in Congress, fiscal incentives (FIs) are to be rationalized while corporate income tax (CIT) will be lowered from 30 to 20 percent.

While the bill is still pending, the AmCham said their member firms are facing an “uncertainty” as to these tax projections, which they said is important for them to calculate their expenses and revenues.

Although the proposed tax package still offers some tax perks, it will remove the 5-percent gross income earned (GIE) tax applied to firms registered under the Philippine Economic Zone Authority (PEZA) in lieu of all other taxes.

Without the 5-percent GIE, companies will no longer be exempted from paying local taxes.

In Cebu, one of the biggest economic drivers is the business process outsourcing (BPO) industry whose players are located in PEZA-registered areas like the Cebu Business Park (CBP) and the Cebu IT Park.

According to MCCI’s Yu, a slowdown in the BPO and PEZA investments in Cebu can easily chop off one percent of local gross domestic product (GDP) growth.

“An economic slowdown can have an immediate trickle effect to purchasing power and business confidence, and this will lead to stagnation and signs of overheating,” Yu explained.

Industry groups and business chambers have been asking the government to reconsider the passage of the second tax reform package.

“What needs to be done is to rethink the second tax reform package and hold its implementation until our economic managers finally have a good grip of the realities on the ground,” he said.

He pointed out that the Tax Reform for Acceleration and Inclusion (Train) law, which took effect last January 1 and slapped some products with new or higher excise taxes, has contributed to the country’s increasing inflation rate, which reached a nine-year high for August at 6.4 percent.

Before moving on to the “possible minefield” that is the second tax reform package, Joseph suggested that the government should first solve the problems caused by the Train law.

For Cebu Chamber of Commerce and Industry (CCCI) President Antonio Chiu, government should be allowed to restructure and consolidate tax incentives that were granted over the years.

However, it should be done in a way that the country’s competitiveness as an investment destination would remain, especially amid competition from other countries like Vietnam, Thailand, and Indonesia.

“Otherwise, foreign companies will always relocate to other countries where they are welcome and cost of manufacturing is lower. As it is now, the cost of doing business in the Philippines is much higher than our neighbors,” he said.

The CCCI has been advocating for the reduction of corporate income tax to only 20 percent. They pointed out that other countries in Southeast Asia are already at 20 percent or less while the Philippines is currently at 30 percent.

Among the foreign investors in the country that complained on the need for tax incentives from government is Swiss food multinational brand Nestle.

The firm recently said they may shut down their coffee processing plant in the Philippines unless they get tax incentives from the Philippine government.

In a report from Nikkei Asian Review, Ernesto Mascenon, senior vice president and head of corporate affairs of Nestle’s Philippine unit, said they hoped Congress would “address the disadvantage of local manufacturers which use local agriculture products against those importing finished goods.”

“Otherwise the option for us is we will close down our manufacturing here and just move to Indonesia, or Vietnam, Malaysia, and import,” he said.

Philippine laws prohibit beverage makers from importing sugar as a way to protect Philippine sugarcane planters. Because of this disadvantage compared to rival firms, Nestle is pushing for an exemption from the country’s 12 percent value-added tax.

Nestle operates a coffee processing plant in Cagayan de Oro in Mindanao and sources 70 percent of its coffee locally. The plant supports around 10,000 local growers, which is a quarter of the industry.

Sought for comment, MCCI’s Steven Yu said that while Cebu may not be directly affected if Nestle pushes through with its plan to halt its operation in the country, it would still send a bad signal to other investors that are planning to invest in the country including Cebu.

“Nestle’s decision to consider halting beverage production is a black eye and a negative vote of confidence to the Philippines,” Yu said.

“Loss of employment opportunities and source of income to farmers for a high value crop like coffee is a big blow to our country’s efforts to attract more FDIs (foreign direct investments),” he added.

Read Next
RONDA COPS BOOTED OUT