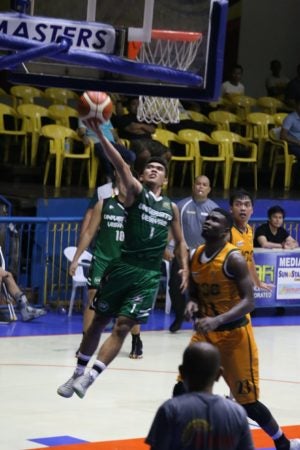 The University of the Visayas (UV) Green Lancers leaned on the exploits of former league MVP Rey Anthony Suerte to come from behind and defeat the University of San Carlos (USC) Warriors, 73-69, in the 2018 Cesafi men’s basketball tournament on Tuesday night at the Cebu Coliseum.

Suerte, the 2016 MVP and consensus best player in the south, scored 11 of his 29 points in the final canto, including five straight capped by an and-one that tied the count at 68-all with 1:43 to go. He also had four rebounds, three assists, three steals and a blocked shot.

Then after USC’s Sommy Managor split his charities to shove the Warriors back in front, 69-68, wily guard Gileant Delator banked in a floater off the right wing to give UV the lead for good, 70-69, time down to 1:17. Two free throws by Suerte raised the Green Lancers’ lead to three, 72-69.

A miss by Managor and turnover by Delator left the door ajar for USC but rookie guard Roosevelt Jelianggao flubbed a tough layup. Delator then sealed the win with a free-throw with 8.1 ticks left.

Read Next
Deadline for Fil-foreign players’ application for PBA Draft on Oct. 26