For Althea Dennise Rizon —writer of the Dagitab, the publication of Bulacao Community High School— campus journalists have a responsibility to submit accurate, factual information not only in their papers but on social media.

Rizon, a Grade 8 student, said campus journalists like her are stewards of good journalism that should instill truth to fellow millennials online.

“Most millennials depend on what is being spread in social media, without evaluating kung tinuod o di (if it is true or not),” she said.

Rizon was one of more than 200 students from public elementary and high schools in Cebu who attended the Campus Journalism Forum organized by Cebu Daily News at the SM City Cebu Trade Hall yesterday. 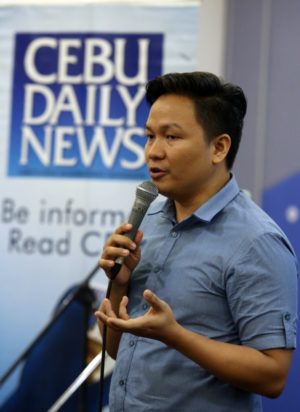 During the forum, Baguia said campus journalism is alive and well largely due to the efforts of campus journalists in the martial law years who spoke out against the regime of the late dictator Ferdinand Marcos.

“(These campus journalists) kept speaking out even as the government silenced media outlets,” he told the students.

Amante later told the students to always verify information they read online to determine whether it is fake or authentic.

For her part, de Vela said the radio industry continues to thrive despite the presence of competing platforms like live streaming on social media.

She said like newspapers, radio stations learned to adapt online streaming to enhance their reach to the audience.

Cris Evert Lato-Ruffolo, project lead of the forum, said the activity focused on the background of campus journalism and the challenges facing it.

The Campus Journalism Forum is one of many scheduled for the celebration of the 26th Cebu Press Freedom Week.

For Rizon, the forum taught her the importance of responsible journalism at a time when fake news is rampant in social media. “(Campus journalists) can help determine if the source is reliable and we can influence others to evaluate it so they won’t be deceived,” she said.