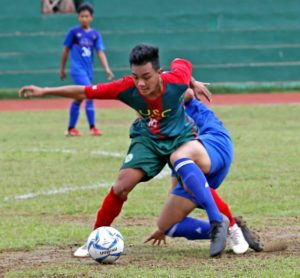 Frank Lawrence Mendoza (10) of USC-BED tries to defend the ball from Nathan Gamaliet Bajarias of SHS-Ateneo de Cebu during their match in the 2018 Cesafi secondary football tournament at the Cebu City Sports Center.
(CDN PHOTO/JUNJIE MENDOZA)

This, after Ateneo blanked University of San Carlos-Basic Education (USC-BED), 2-0, courtesy of Leo Maquiling who scored goals in the 50th and 70th minutes of the match.

In the first match of the day, University of San Jose Recoletos (USJ-R) and University of Southern Philippines Foundation (USPF) each scored a point after ending their match in a 1-all draw.

USPF scored first via Dave Arizala in the 50th minute and it had seemed that the Baby Panthers had the win in the bag.

A last minute goal by Dustin Dray Ramirez in the 90th minute, however, put both teams in a stalemate.

Ateneo hopes to solidify its hold of the top spot when it faces first timer and a guest participant, the Sisters of Mary School Boystown Aloysians, at 10 a.m. today in the same venue.

In the afternoon, USC-BED hopes to shrug off its loss yesterday with a win against USPF at 1 p.m.

The teams will play in a single round robin format with the top four teams advancing to the semifinals.

The winners will advance to the finals.