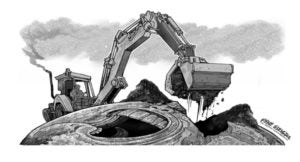 Even with the loss of lives and property that ensued in the landslide’s wake in Barangay Tinaan, Naga City one has to ask the inevitable question: Should the national government totally ban mining activities?

It’s not just Naga that experienced this tragedy though it happened days after supertyphoon Ompong (international name Mangkhut) left the country to wreck havoc in China.

Itogon town in Benguet province reeled from a landslide that claimed more than 40 lives in the wake of Ompong’s wrath. In both Naga and Itogon, the victims blamed the companies for their operations that eventually caused the cracks in the soil which a heavy downpour softened enough for rocks, sand and boulders to slide through and onto the hapless settlers below.

As expected both companies — Apo Land and Quarry Corp. in the City of Naga and Benguet Corp. in Benguet province — denied being responsible for causing the landslides even if some of the victims were their own workers.

President Rodrigo Duterte’s order to suspend mining operations in the City of Naga and Benguet and other areas in Central Visayas were followed belatedly by Cebu Gov. Hilario Davide III and Naga City Mayor Kristine Vanessa Chiong who each issued suspension orders on quarrying activities in the province and city respectively.

Which brings us back to that question that had gained local significance in Cebu in the wake of the Naga City tragedy: Should mining be totally banned in the country and what’s the alternative for doing so?

There will be fierce arguments for and against a total ban on both mining and quarrying but the realistic scenario is that it cannot and won’t be implemented. In fact, President Duterte’s suspension order is seen as a compromise by both sides in the aftermath of the twin tragedies.

Most of the commodities we use and now take for granted in our everyday lives like cell phones are built using materials excavated from the bowels of the earth. It’s not like they came out of a paper bag or appeared out of thin air like magic.

Sand and gravel is used to build homes and buildings and the construction boom resulted in intensified quarrying operations. Environmental groups have repeatedly called government like the Capitol to task for failing to regulate them.

But even staunch environmentalists like Gina Lopez are not opposed to mining so long as it is done right. As far as quarrying is concerned, it’s time for both government and developers to assess and undertake measures aimed at regulating, even restricting these operations.

As things stand now, companies prefer to go cheap and employ destructive methods that cause tragedies like what happened in the City of Naga and Benguet.