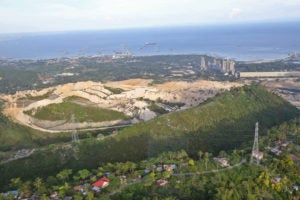 WHILE growing up, Procesa Aliganga was accustomed to the quarry operations of a cement firm which was just 50 meters away from her home in Barangay Tinaan, Naga City, Cebu.

She added the quarry operations of Apo Cement Corp. (Apo Cemex) also brought in more residents in Sitio Sindulan, Barangay Tinaan, who went there to work.

Environment Secretary Roy Cimatu has expressed doubts that quarrying was responsible for the landslide that killed at least 77 people in Sitio Sindulan, Barangay Tinaan, Naga City.

He told a news conference in Manila on Sept. 27 that the quarry site was in the area way ahead of the communities where the people lived.

He said quarrying could not be directly blamed for the tragedy.

““The quarry site is at an isolated area, but many moved in because of the workers, until it became vulnerable to landslide,” he said.

But Cimatu said that quarrying activities in Naga would remain suspended until a team from the Mines and Geosciences Bureau released its assessment of the geohazard condition of the area.

Naga City Mayor Kristine Chiong said that while they had not stopped the search and retrieval operations yet, they were looking into the possibility that the missing persons were among the 16 body parts that were retrieved.

She said they would decide on Thursday, or two weeks after the tragedy if they would stop the retrieval operations and proceed to the clearing of the landslide area.

Aliganga said that since the landslide happened on Sept. 20, they had been reluctant to go back to their home, which was located at the foot of the mountain that collapsed and buried at least 50 houses.

Aliganga said they could not also directly blame the quarry operations near their area because they also believed that the incessant rains downpour also contributed to the landslide.

Chito Maniago, representative of Apo Land and Quarry Corp., told Cebu Daily News in an interview that they would continue to coordinate with all government units to show that they were conducting their operations in good faith.

“We are not saying that our operation is a perfect one. But rest assured, we are doing our best to operate within the bounds of law,” Maniago said.

“We will be complying fully with all the investigations being conducted. All the documents that they will need, we will provide. We will be sharing to DENR (Department of Environment and Natural Resources) the way we operate to show them that we have been in Cebu for several decades and we are trying to be as responsible as we can,” Maniago added.

Maniago added that the priority of the ALQC in the meantime was to help the Naga City government in sustaining the needs of the evacuees and helping the directly affected residents.

“In fact, we have committed a one-hectare parcel of land for relocation. However, I have not yet updated on the status of that donation if it had been assessed that it can be used as a relocation site,” said Maniago.