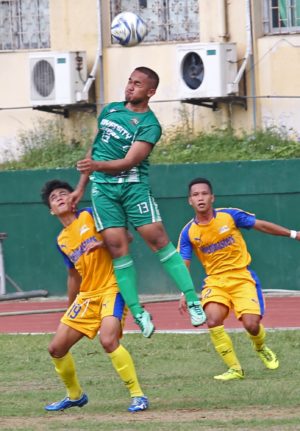 CESAFI FOOTBALL/OCT. 3, 2018: Players of University of the Visayas (UV in green uniform) and University of Cebu (UC) in their CESAFI football game in Cebu Sports center.(CDN PHOTO/JUNJIE MENDOZA)

The University of the Visayas (UV) Green Booters are enjoying the top spot for the first time in the ongoing Cebu Schools Athletic Foundation, Inc. (Cesafi) collegiate football competition.

This after the Green Booters added a point with a 1-1 draw with the University of Cebu (UC) Webmasters yesterday afternoon at the Cebu City Sports Center.

The draw allowed the Green Booters to tighten their grip of the top spot with four points off a 1-0-1 (win-loss-draw) record.

“I am happy because the game [against UC] was crucial. The team this year is better than last year. They are more cohesive,” said UV head coach Alex Ballesteros, a former national team member.

Although only seven of his players remain from last year’s lineup, Ballesteros said that his team’s play is balanced from the defense to the offense, especially now that forward John Vargas has company at the front.

“All that’s left is their conditioning,” said Ballesteros.

For Ballesteros, the goal is to win the championship, especially since UV’s sports program has been strengthened through the efforts of Representative Gerald “SamSam” Gullas of the Cebu’s 1st District, who is the school’s team manager.

The Webmasters actually found the back of the net first in the 17th minute courtesy of Gadriel Lim but the Green Booters were able to equalize in the 30th minute on a goal by Miracle Segun.

The second game saw perennial runner-up University of Southern Philippines Foundation (USPF) Panthers open their campaign with a point after a scoreless draw against University of San Jose-Recoletos (USJ-R) Jaguars.

Read Next
Carmelo has good start with Rockets