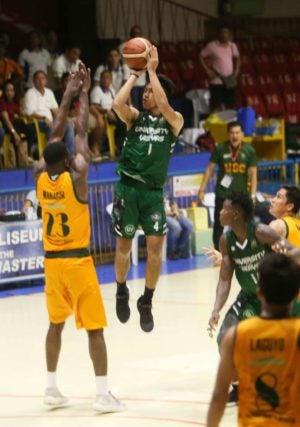 Rey Suerte hits this game-winning three pointer to lead the University of the Visayas Green Lancers to a 80-78 victory over the University of san Carlos Warriors in Thursday night’s Cesafi men’s basketball gamt at the Cebu Coliseum. Lito Tecson

Former MVP Rey Suerte made it a birthday to remember as he scored the game-winning three-pointer with 0.4 of a second left to lift the University of the Visayas (UV) Green Lancers past the University of San Carlos (USC) Warriors, 81-78, on Thursday in the 2018 Cesafi men’s basketball tournament.

The win, their eighth in 11 games, was especially important for the 12-time league champions as it kept their bid for one of the top two spots alive. The top two finishers after the elimination round will head to the semifinal round, armed with a twice-to-beat advantage.

On the other hand, the loss left USC at 4-7 (win-loss) and placed them a game behind idle University of Southern Philippines Foundation, which hold a 5-6 record for fourth place and the last ticket to the Final Four.

The game was tied at 78-all after USC forward John Reel Saycon hit a three-pointer with 4.9 seconds to go.

Off a timeout, Suerte received the ball, shed his defender with a pump fake and rose for a triple from the top of the arc that hit nothing but the bottom of the net to put UV ahead for good, 81-78.

With no more timeouts, the Warriors were not able to get off a shot as time expired.

Suerte, who was celebrating his 24th birthday on Thursday, finished the game with 29 points, five rebounds, five assists, two steals and a blocked shot.

Gileant Delator and Bassiere Sackor finished with 16 points each, the latter also pulling down 16 boards.