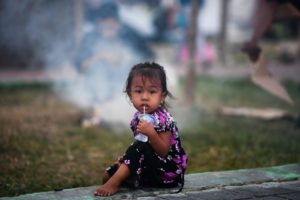 There are almost 200,000 people in need in the area hit by the quake-tsunami, the United Nations says./AFP

More than a thousand people could still be missing after Indonesia’s devastating quake-tsunami, officials said Friday, drastically upping the total number of people unaccounted for a week after the disaster.

Palu City on Sulawesi island has been left in ruins after it was hit by a powerful quake and a wall of water which flattened houses and flipped over cars, with the confirmed death toll now standing at 1,558.

Fears are growing that vast numbers of people have been buried in a massive government housing complex at Balaroa, where the sheer force of the quake turned the earth temporarily to mush.

“We estimate there were over one thousand houses buried, so maybe more than 1,000 people are still missing,” Yusuf Latif, a spokesman for Indonesia’s search and rescue agency, told AFP.

“But we still cannot be sure because there’s a possibility that some people managed to get out.”

Officials had previously estimated that around 100 people were missing.

After days of delays, international aid has finally started to arrive in the disaster zone, where the UN says almost 200,000 people are in need of humanitarian assistance.

Survivors have ransacked shops and supply trucks in the hunt for basic necessities, prompting security forces to round up dozens of suspected looters and warn that they will open fire on thieves.

Authorities previously set a tentative deadline of Friday for finding anyone trapped under ruined buildings, although chances of pulling survivors alive from the rubble at such a late stage are almost zero.