A picture and a story 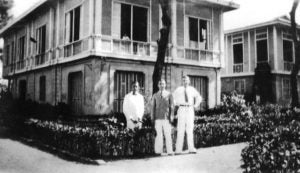 The photo was taken in 1935 at Plaza Hamabar in front of the Cathedral.

THE PHOTO on this page today was taken in Cebu in 1935.

It was located at Plaza Hamabar in front to the Cathedral.

The house was lived in by my grandparents Bartolome and Eva Picornell.

The three men in the foreground are, from left, my father’s brothers Bartolome Jr. and Ramon, and my father Santiago, Gazing at them from the window is their grandmother Evarista La Torre de Vacani.

Shortly after the photo was taken my grandfather rented the lower portion of the house to Oceanic Commercial whose manager was the recently arrived from France Henry Lhuillier.

Our friendship dates back that far.

The photo has its own story.

All the family photos were burned along with everything our family owned during the war, After the war, my grandmother lamented this fact to her sister in Spain.

The sister quickly sent a package with photos they had received through the years.

They, too, had survived the cruel Spanish civil war.

This 1935 pictures was one of them.
* * *
Apropos of recovered photos, I have another story to tell.

My mother and her sisters had two very wealthy spinster aunts in Spain.

They owned blocks of real estate, valuable jewelry and heaps of cash on time deposit.

My mother, her sisters, and an in-law niece were the heiresses apparent.

Now, the wealthy aunts lived next door to a congregation of nuns whose convent stood on their property.

The nuns took very good care of the spinster aunts.

A frequent visitor was the in-law niece who cajoled the spinsters about who would inherit what.

Once in a while she’d manage to get a bracelet or a pair of earrings from the aunts who were getting quite irritated with her.

One day, the old aunts called a family gathering where they announced that they were leaving their entire fortune to the nuns next door.

All the papers had been drawn and that was that.

The niece-in-law must have had some stroke for ever since then she often bit her tongue.

My mother and her sisters had only one reaction.

What would those nuns do with the family photos?

They continued to visit the old aunts until they died, one shortly after the other.

“We must do something about the pictures before those nuns throw them to the garbage bin,” they told each other, as some of those photos dated to the 19th century.

One of my aunts, the one who was unmarried, was tasked with the project.

When she visited the convent, before she could state the reason for her visit, she was told that there was nothing in the spinster aunts’ inheritance for her.

“I only came to ask if you would be so kind as to give me the family photos,” she calmly told the nun.

“Surely, you have no use for them, and they could only be valuable to the family.”

She was given a large box heavy with photos.

Among them my aunt found a cross of a rather faded metal with stones that sparkled.

She took it to her jeweler who confirmed the metal was not fold and the stones were not brilliant diamonds.

“It is an old piece and it will look nice after I plate it. And the stones, though glass, have been faceted like diamonds.”

One day, my aunt was invited to take tea with her brother and sister-in-law.

It was a social event and so she wore the cross on a golden chain.

The in-law took notice and could not help asking where she had obtained such a magnificent jewel.

Had she bought it at some auction?

“It belonged to one of the old aunties.”

The in-law had a coughing attack.

My aunt never let on that the cross was a fake, Anyhow, elegant as she was, it looked good on her.