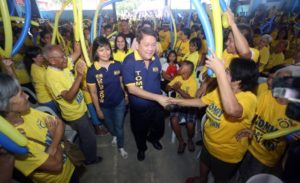 Cebu City Mayor Tomas Osmeña shakes the hand of a supporter at the Lahug Elementary School where he announced his team-up with Councilor Mary Ann delos Santos in next year’s elections.
CDN PHOTO/LITO TECSON

Cebu City Mayor Tomas Osmeña will be teaming up with Councilor Mary Ann Delos Santos in next year’s midterm elections.

Osmeña made this announcement yesterday during a sortie at the Lahug Elementary School gym.

Delos Santos was first affiliated with the opposition Team Rama (now Barug-PDP Laban) and was one of the mayor’s most vocal critics then.

She jumped ship in 2015 shortly after she resigned as the minority floor leader in the city council back then.

BOPK’s slate for next year’s polls will include a possible comeback for some old faces in the Cebu City Hall.

Osmeña gathered party mates and supporters yesterday for an early morning Thanksgiving Mass at the Lahug Elementary School gym before he formally announced the members of his slate.

Candidates under BOPK are expected to file their certificates of candidacy (COCs) this Monday, October 15.

Meanwhile, Osmeña also announced that BOPK is no longer affiliated with the Liberal Party (LP).

He said that they have pledged allegiance to the Laban ng Demokratikong Pilipino (LDP) party of Senator Sonny Angara.

“(We chose LDP) because LDP is very neutral,” Osmeña said when asked why they decided to bolt the LP.

He added that another reason why BOPK decided to leave LP, which was the ruling party during the term of former President Benigno Aquino III, was because the national party allegedly junked his older brother, former Senator Sergio ‘Serge’ Osmeña III, during the May 2016 Senatorial race.

Osmeña however, clarified that although they dumped LP, he remains committed to Vice President Leni Robredo.

When asked if their alliance with LDP also meant that they will be endorsing the latter’s senatorial bets, Osmeña said that as of now, they can only throw their support behind Angara.

“Only Angara for sure. (Because) he is the President (of LDP),” he explained in a follow-up message sent to Cebu Daily News.

Read Next
Osmeña not keen on amicable settlements