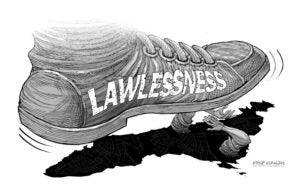 At the current tally of 198 killings, 47 of which occurred during police operations and the rest committed by unknown assailants, the Cebu police leadership should at least not pretend that nothing is wrong as far as the province’s peace and order situation is concerned.

“What state of lawlessness? Define lawlessness,” Chief Supt. Debold Sinas, Police Regional Office (PRO-7) chief, told reporters when asked about his response to concerns from Cebu’s business sector about the seeming lawlessness in the province due to the spate of (mostly) unresolved killings.

Both Sinas and Supt. Royina Garma, Cebu City police chief, see nothing wrong with the mounting death toll given that their boss, President Rodrigo Duterte, made no bones about his marching orders to them and other police officials to wage war against drug suspects regardless of the casualties.
And a bloody war it had become since even before the president was sworn into office, that the country’s re-election in the United Nations (UN) rights council had been questioned by rights groups due to the administration’s trail of blood.
As they see it, the mounting body count means they are doing their jobs as law enforcers as defined by their boss. Never mind if the illegal drug trade continues unabated and had gone further underground despite the high market value pegged by its suppliers to its buyers.
To both Sinas and Garma and other police officials, more dead bodies equals good job performance and job security. That there were law enforcers also killed along the way, with no solid evidence linking them to the drug trade other than unsubstantiated claims of their involvement presents a chilling climate of impunity to businessmen and investors unused to doing business in an environment where anyone suspected of criminal ties can be killed in broad daylight.
That’s what Sinas and Garma fail to see or tend to overlook. Contrary to their belief, not all people feel safe when seeing and learning of dead bodies strewn in the street by assailants who remain unidentified but are believed by a growing number of critics including Cebu City Mayor Tomas Osmeña of belonging to the police rank and file.
That these assailants continue to run rampant and unpunished had led Sinas and Garma to claim that they were hired by syndicates out to discredit the police but the burden of proving their claims lie squarely on them and no one else.
Again, both Sinas and Garma should not pretend nor ignore the growing clamor for transparency and accountability in their war against drugs and crime not just from the business sector but from the community they serve.

Read Next
Some me-time, this time