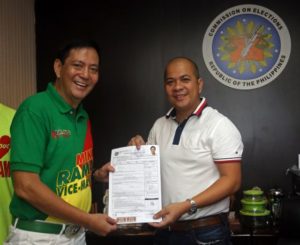 Former Cebu City mayor and now vice mayoral candidate Michael Rama shows his certificate of
candidacy for the May 2019 elections.

While himself still in the government’s so-called “narcolist,” former Cebu City Mayor Michael Rama yesterday dared the Philippine National Police to name the drug lords operating in Cebu who would be backing candidates in next year’s elections.

Rama, speaking to reporters yesterday, said the police could not just say that drug money would flood Central Visayas during this election season without naming the drug lords who are supposed to fund the campaigns of some candidates in the region.

Otherwise, he said, this report of drug money funding campaigns would just be talk.

Naming drug lords may help the police and the public to track down politicians who may receive drug payola from them, Rama added.

“In my case, I am still waiting for the name, and looking for this drug lord whom they accused me of protecting,” said Rama.

“Because (right now) it’s all insinuation, all false accusations … and it will never lead to any conclusions, and to the court for justice,” he added.

On Wednesday (October 17), Police Regional Office in Central Visayas (PRO-7) director Chief Supt. Debold Sinas said money from the illegal drug trade may be used to finance the campaign of some politicians for the May 2019 polls.

October 17 also happened to be the last day of the filing of certificate of candidacy (COC) for those running in the midterm elections.

Rama was tagged by no less than President Rodrigo Duterte in 2016 as a drug protector, along with two town mayors in Cebu — Vicente Loot (Daanbantayan) and the late Mariano Blanco III (Ronda).

The former mayor of Cebu City vehemently denied these accusations, and has attempted to clear his name multiple times.

Loot and Blanco had also belied the accusation.

Rama, who lost his reelection bid in 2016 to Mayor Tomas Osmeña, is running for vice mayor in May 2019.

There were expectations for Rama to have a return bout with Osmeña in 2019 but Rama opted to slide down and be the runningmate instead of his Barug PDP-Laban partymate, Vice Mayor Edgardo Labella, who will slug it out with Osmeña for Cebu City’s mayoral race.

Months before Rama filed his COC on Wednesday at the Cebu City-North District office of the Commission on Elections (Comelec), he was granted an
audience by President Duterte.

There was however no pronouncement from the President that cleared Rama of any involvement in illegal drugs following their meeting last March.

Rama also underwent and passed the drug test conducted by PRO-7 in September.

Sinas, however, has earlier said that only the central office of the Philippine Drug Enforcement Agency (PDEA) could clear Rama’s name.

When asked how would he feel should he be tagged anew as a drug protector particularly during this election period, Rama said it should not happen again.

“They should not just drop our names and accuse us of something as grave as being a drug protector. In the first place, my name shouldn’t be on the list,” he added.

The government, meanwhile, is still determined to purge the country of narco-politicians now that elections are only seven months away.

This time, the Philippine Drug Enforcement Agency (PDEA) proposed to have the candidates undergo drug testing in order to determine if they are into illegal drugs.

Last October 3, the Department of the Interior and Local Government (DILG) proposed to Comelec to disqualify candidates who are on the so-called
narco-list.

They shared the same opinion that public officials, especially those seeking elective positions this May 2019, should set as an example by passing drug tests.

Meca said the results would serve as proof that politicians may have or may have not any involvement with illigal drugs.

“I’m for it. Personally lang, not speaking in behalf of CPADAO. I am in favor of conducting drug tests, “ Durano-Meca said on Thursday.

“That is one way (to) signify (that) we are serious (in our) campaign against illegal drugs. Our officials should set the right example,” she added partly in Cebuano.

While an existing policy of the Civil Service Commission (CSC) and the Dangerous Drugs Act (DDB) required all government employees to undergo drug testing, Durano-Meca admitted that subjecting candidates to mandatory testing may have legal repercussions.

In a press conference in Quezon City, PDEA Director General Aaron Aquino said a surprise drug test to the electoral candidates would be a “good idea.”

The Dangerous Drugs Board (DDB) also urged candidates who will be elected to office to submit themselves to a mandatory drug test in order to ensure a drug-free work environment in the government.

However, Cebu Provincial Election Supervisor Lionel Marco Castillano said the Commission on Elections (Comelec) could not require the candidates to submit themselves to a drug test since the Supreme Court has declared as unconstitutional the provision of the Comprehensive Dangerous Drugs Act that required candidates to undergo mandatory drug testing.

“The Comelec only enforces the law. We cannot implement and require a mandatory drug test if there is no law requiring it. If PDEA wants a drug test, maybe it’s OK if done voluntarily,” said Castillano.

Castillo believed it would be “beneficial” for candidates to voluntarily submit themselves to drug testing, especially those who have been linked to
illegal drug use.

Sinas, for his part, also supported PDEA’s plan, saying they would be willing to assist the agency to conduct surprise drug tests in order to ensure a drug-free elections.

He also warned that they will not hesitate to publicly divulge the names of candidates who will test positive for drug use.

“But it is up to PDEA to give sanctions to the candidates who will be positive in the drug test but we will inform the public of the results,” Sinas added.

However, he said PRO-7 was not keen on revealing the names of politicians who are part of the “narcolist.”

He said they would rather leave that matter to PDEA and DILG.

“Actually, the Chief PNP, Oscar Albayalde, has the same pronouncement. We are very supportive of this project,” he added.

DILG has the copy of the Duterte administration’s narcolist.

Sinas also said it should be up to the voters to decide if they would still elect a candidate who tested positive of drug use.