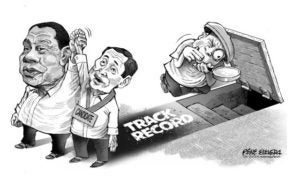 This early, Filipino voters including those in Cebu province, should prepare their list of candidates to vote for in next year’s midterm elections following last Wednesday’s deadline for the filing of candidacies in the local and national level.

One potential criterion for choosing the candidates that may be worth public consideration, aside from the candidate’s track record and qualifications of course, is the size of their contingent and how they managed to conduct themselves as they filed their candidacies for elective posts.

Depending on one’s viewpoint, the size of the contingent reflects the candidate’s cordon sanitaire or feeling of self-worth which may or may not be dependent on how many people are accompanying them as they filed for candidacy.

The former administration had a word for it: wangwang or the siren that accompanies the fleet of a very important person (VIP) usually a public official that grants him or her exemption from traffic rules to the chagrin of the riding public.

In that respect, again depending on where one sits on the political fence, Special Assistant to the President Christopher “Bong” Go takes the cake for being accompanied by President Rodrigo Duterte himself along with several Cabinet officials when he filed his candidacy for the Senate despite repeated denials that he won’t run for office.

No matter how many times the Palace insists that no special allowances were given to Go, the President’s mere presence and his Cabinet contingent should be a telling reminder to the public that the administration isn’t afraid nor won’t hesitate to throw its own weight when one of their own is in a position to advance their agenda.

But that’s one example of what the public sees as an everyday occurrence during that time of year when the Commission on Elections (Comelec) opens the doors for the elections.

There is always that “show of force” or what politicians would prefer to call as “overwhelming show of support and solidarity” among their allies as they troop to the Comelec office to formalize their bid for public office.

Those who get to watch these shows are mostly there to be entertained and if they’re lucky, receive some giveaways including cash from the candidates.

The bigger the crowd, the noisier their contingent and supporters get and the more festive and self-important their entrance to the Comelec is, the more people should question whether those candidates are all just for show or whether there is something in them that makes them deserving of popular support.