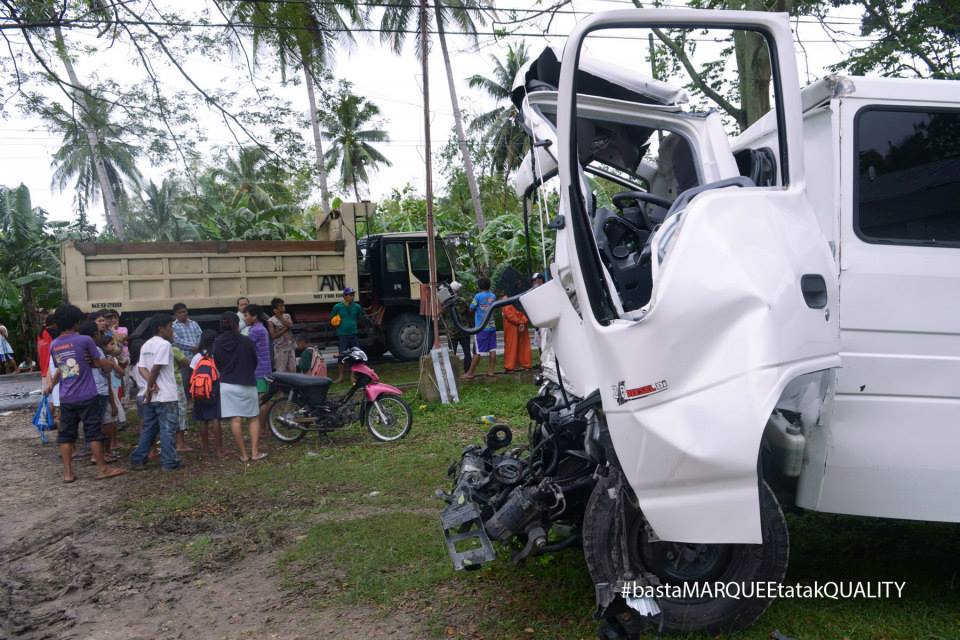 Residents of barangay Talaga in Argao town crowd around the 10-wheeler truck and the wreckage of the Mitsubishi L300 van involved in the fatal collision. (FACEBOOK GRAB FROM MARQUEE LUZANO)

Three persons, including a 10-year old boy, were killed while 10 others were injured on Thursday morning when the van they were riding in collided with a truck in Argao town.

The Mitsubishi L-300 van had 13 passengers, mostly persons with disabilities (PWDs) and some children from the towns of Oslob and Dalaguete who were heading to Chong Hua Hospital in Cebu City for a medical check-up.

PO3 Bernie Lao, investigator at the Argao Municipal Police Office, said van driver, Jose Ramil Entice, was overtaking a tricycle along the national highway in barangay Talaga, but the road was slippery, causing the van to swerve to the other lane and collided with a 10-wheeler truck that was heading to Dalaguete town.

The accident happened in the same vicinity where a Ceres bus  fell on its right side while negotiating a curve in August last year. A government midwife was killed while 10 others were injured in the road mishap.

In yesterday’s accident, two women — Guillerma Belandres, 35, a resident of Dalaguete town, and Rosalinda Laurente, 42 of Oslob town – were pronounced dead on arrival at the Isidro Kintanar Memorial Hospital in Argao, police said.

Diether Caracol, 10, a resident of Oslob town, died an hour later in the same hospital, PO3 Lao added.
Belandres and Laurente were reportedly escorting their relatives who were PWDs.

Ten others were hurt, including the truck driver, Mandy Estares, but he was not brought to the hospital because his injuries were minor. He was, instead, placed in police custody pending the filing of charges before the Prosecutor’s Office.

Estares, the truck driver, questioned his detention, insisting he was not at fault since he was driving on the right lane.

Roy Entice, brother of the van driver, told Cebu Daily News nobody wanted the accident to happen.
“It was an accident. The road was slippery. We could not avoid accidents from happening in a slippery, curved road,” he said in Cebuano.

Dan Luster Cala, one of the survivors, said the fatality, Rosalinda Laurente, was thrown out of the van on impact.
“Dan told me he was sitting behind the driver and he saw how yaya (nanny) Rosalinda rolled out of the van,” said Geneva Gulay, a cousin of the 18-year-old Cala.

“Everyone shouted for help.”

Gulay said it was Laurente’s first time to accompany Cala as it was the boy’s mother who usually tags along when they go to Cebu City for a medical check-up.

(Dan is usually accompanied by his mother but she’s working in Manila that’s why it was Rosalinda who was left behind to care for him.)
Diether Caracol, the 10-year-old fatality, was excited to see a doctor in Cebu.

Diether was with his elder sister Allison and 1-year-old brother Luis. The three siblings were suffering from an eye defect and a nongovernment organization was bringing them for treatment to Cebu City.

“Diether said he was hopeful that he and his siblings would get their eye defect treated so they will no longer be teased and laughed at by other children in school,” said Maria Corazon Gabrines, the victim’s aunt.

Miche Carl Nadala, a staffer at the Isidro Kintanao Memorial Hospital, said he heard the boy call for his mother moments before he died.

“He was bloodied all over. He shouted: ‘Ma!’ and his mother (Arieta) who was also among the injured called his name back. A few seconds later, the boy died,” Nadala told CDN.