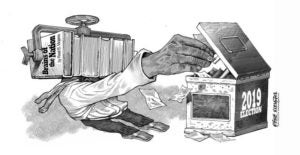 Who will win in the local, senatorial, congressional, party list, and autonomous Mindanao elections in May 2019?

The answer, to a large extent, depends on how intelligently voters will deal with the reading matter with which they will be swamped as the campaign period progresses.

It also depends on how voracious and critical voters have been all these years in reading material that pertains to the life of our nation.

There is still time for voters to make up for any deficiency in the kind of reading that promotes a sense of nationhood before the day of reckoning in May.

His book, “The Brains of the Nation,” which explores the thought of Pedro Paterno, T.H. Pardo de Tavera, and Isabelo de los Reyes can help Filipinos realize the intellect and discernment of their own contemporaries.

It can help them grow in an attitude of welcoming viewpoint diversity, avoiding the defective categorization of fellow citizens into Dutertards or Yellowtards (that today energizes the acrimony flooding social media).

“Waiting for Mariang Makiling: Essays in Philippine Cultural History” delves into the stories that have contributed to our national imaginary, including the legend of the mountain goddess Mariang Makiling, the hagiography of Saint Pedro Calungsod, and the account of the European discovery of the Philippines.

It can open readers to realizing that today’s contested accounts of the darkness of martial law, the rationality of the 1986 Edsa People Power Revolution and, the national pacifism manifested as resistance to coup d’etats are expressions of principles and aspirations for maturing in nationhood, not disposable sectoral propaganda.

“The Feast of the Santo Niño: An Introduction to the History of a Cebuano Devotion” can help open Filipinos to the integral role of faith and the spiritual in the life of Philippine society.

This is a need today when the moral voice of religious groups especially the Catholic Church in the arena of politics are mocked or dismissed.

These are just some of the works that show how immensely deserving Mojares is of the title of National Artist.

The recognition given to him is a triumph of the Cebuano, a glory of the Filipino.

But the reality of this victory is also yet to be measured.

It will be proven each time a Filipino, widening his reading habits, covers more than just Instagram posts, Facebook status updates, or Tweets and turns to the pages of Mojares and other national literary greats.

Then the Filipino’s decisions, such as that of whose names to write on his ballot are anchored in the wellsprings of excellent scholarship, in the wisdom that only reason speaking as engaging stories and histories effectively teaches.