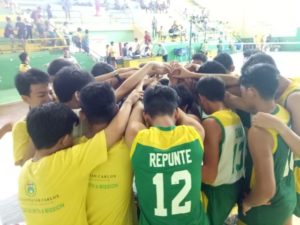 The University of San Carlos (USC) Baby Warriors took a step closer to retaining their title after advancing to the best of three finals series with a two-set sweep of the University of San Jose Recoletos, 26-24, 25-18, in the Cebu Schools Athletic Foundation, Inc. (Cesafi) boys volleyball yesterday at the Cebu City Sports Institute in Barangay San Nicolas, Cebu City.

“And, the only way is to defeat USJ-R in straight two sets. I am very thankful that we did,” Sasing added.

According to Sasing, he got worried during the first set.

“Fortunately, the players were able to cope up, giving us a big lead from start to finish in the second set.”

Based on the quotient system, USC marked a 7/2 (sets won over sets lost), while USPF had 6/3, sending both to the finals while USJ-R, who ended with 5/4, will battle for third place against SWU-Phinma, who lost all games in the semifinals.

“I reminded the team how important the match was,” Sasing said.

“That is why they gave their best effort in committing less errors.”

The Cesafi Boys and Girls Volleyball tournament finals will start this afternoon at the USC Gym.

The Girls division finalists are USPF and USJ-R. USC and Ateneo will contest for the third place.

Read Next
Hontiveros’ son not ready to leave Cesafi