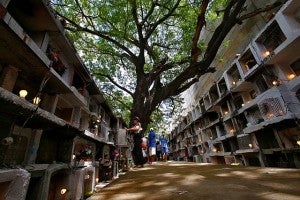 In order to avoid the dense crowd, and losing unattended belongings, officers from the Cebu City Government advised those who wish to visit the cemeteries to do so earlier than usual.

These are the Carreta and Calamba public cemeteries.

During yesterday’s inspection, the city government’s personnel instructed tomb caretakers to make sure that wires and cables are properly installed and to keep the paths clear from any obstructions such as stalls used to sell food.

Harold Alcontin, operations officer of CCDRRMO, said most of the problems arising during All Saints’ Day and All Souls’ Day were due to the fact that a large volume of people visit the cemeteries at night time.

(We also urge the people, to visit their dead while it’s still early, and there’s only a few people, and there’s still daylight. As much as posssible, let us try to avoid the crowd.)

He also discouraged the public from bringing any sharp objects or bladed weapons whether these will be used to clean the tombs. Alcoholic drinks are likewise not allowed inside cemeteries.

Aside those from CCDRRMO, responders from the city’s Quick Response Team (QRT) and first-aid team from the Emergency Medical Services (EMS) have been deployed to nine public cemeteries in the city starting yesterday.

Law enforcers from the Cebu City Police Office (CCPO) were also present in cemeteries as of yesterday morning to ensure peace and order for this year’s All Saints’ Day and All Souls’ Day cemetery visits.