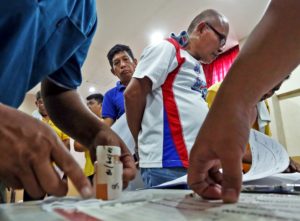 BUS drivers, dispatchers, and operations staff from the city’s two bus terminals got the surprise of their lives on Monday morning when they were subjected to a drug test as part of Oplan Undas Spot.

Lawyer Wardley Getalla, PDEA-7 Regional Director, said that Oplan Undas Spot was implemented to ensure that drugs will not find their way into the province during the celebration of All Saints’ and All Souls’ Days.

“The Oplan Undas Spot is a series of activities to keep the passengers safe by assuring them that the drivers of the buses are drug-free,” said Getalla.

A total of 68 drivers and dispatchers from the NSBT and 55 from the CSBT have undergone the drug test.

Tumulak said that the drivers who return positive results will not be allowed to drive and may face suspension from the Land Transportation Office (LTO).

“We cannot tell how many of these drivers use drugs because even the bus operators are not familiar with them. That is why this surprise drug test is a great help,” Tumulak said in Cebuano.

Aside from the surprise drug testing, PDEA-7 has also deployed bomb and drug sniffing canines along the entrance and exit points of terminals and ports.

Getalla added that Oplan Undas Spot will continue until the weekend since drug traders are expected to be on the move during the holidays when there is an influx of people in the ports and terminals.