Nurse going on trial in Germany over 100 patient deaths 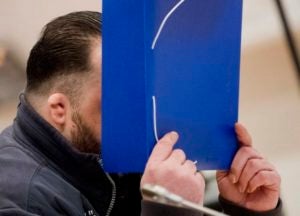 The defendant covers his face with a folder as he arrives at the temporay Oldenburg district court at the Weser Ems halls in Oldenburg, Germany, on October 30, 2018.
/AP

BERLIN — A nurse serving a life sentence for two murders went on trial Tuesday on charges that he killed a further 100 patients at two hospitals in Germany.

The murder charges against Niels Hoegel, 41, stem from his time at a hospital in the northwestern city of Oldenburg between 1999 and 2002 and at another hospital in nearby Delmenhorst from 2003 to 2005.

Hoegel was convicted in 2015 of two murders and two attempted murders. During that trial, he said he intentionally brought about cardiac crises in some 90 patients in Delmenhorst because he enjoyed the feeling of being able to resuscitate them. He later told investigators that he also killed patients in Oldenburg.

The Oldenburg state court is conducting the trial at a courtroom set up in a conference center, a venue chosen to accommodate a large number of co-plaintiffs and public interest in the proceedings.

An additional conviction could affect Hoegel’s possibility of parole, but there are no consecutive sentences in Germany.

Read Next
One missing in Abra as ‘Rosita’ crosses Luzon