6 killed in ‘peaceful and orderly’ Undas 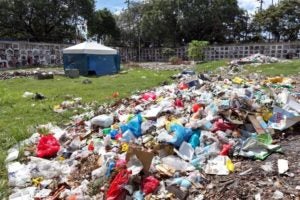 Mounds of trash are seen inside the Carreta Public Cemetery, a perennial problem
during All Saints and All Souls Days.

Six persons were killed in different parts of Cebu during the All Saints’ and All Souls’ Days celebration which the police described as generally peaceful and orderly.

In Carcar City, a man was killed while another was injured in a shooting incident in Barangay Poblacion during a drinking session.

In Toledo City, two persons were killed in hacking incidents while a man was shot dead in San Francisco, Camotes Island.

Supt. Janette Rafter, CPPO spokesperson, said that personal grudge was the common motive in the incidents.

In Cebu City, two persons died in a shooting incident in Barangay Tagbao and a stabbing incident inside the Fuente Osmeña Circle on Nov. 1.

Supt. Wilbert Baliguat, the chief of Investigation, Detection, and Management Branch (IDMB) of CCPO, said that except for the said incidents, All Saints’ and Souls’ Days in Cebu City were generally peaceful.

“All activities in the cemeteries were peaceful and in order,” said Baliguat.

He said that the crowd in major public cemeteries in the city were manageable and there was a smooth flow of both vehicular and human traffic.

(Although we have incidents of missing kids, these were promptly addressed by our men)

Starting today (Nov. 3), the Police Regional Office in Central Visayas (PRO-7) will lift the red alert status all over the region.

Both Baliguat and Rafter said they will slowly pull out policemen deployed in cemeteries.

As always, the problem of trash piling up inside and within the vicinity of Cebu City cemeteries continue to burden authorities.

Roberto Cabarrubias, chief of Cebu City’s Department of Public Services (DPS), said all of the over 100 personnel deployed by the city started collecting the mounds of trash on Friday evening.

“Wala niy tulganay amo kay dapat inig Sabado hurot na ug kolekta tanan (This will be an all-nighter because we have to collect all garbage by Saturday),” Cabarrubias told CDN.

He added that majority of their heavy equipment, consisting of six ten-wheeler trucks and 21 rented dump trucks, were deployed in cemeteries to collect trash which are mostly plastics and leftover food.

The DPS said that huge public cemeteries such as Carreta and Calamba generate the largest volume of trash.

Meanwhile, the police in Mandaue noted cemetery visitors this year are more disciplined compared to the previous years.

Entoma said they recorded only about 5,000 cemetery visitors on Friday, compared to the 15,000 individuals on November 1.

Because of this, garbage also decreased this year.

Denzil Bañez, eco enforcer of the Mandaue City Environment and Natural Resources Office (MCENRO), said that from the usual eight, they only had four garbage collection trips this year.

He believed that a city ordinance penalizing littering in Mandaue may have made the public more aware of where to throw their trash.