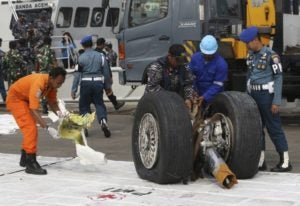 Officials move a pair of wheels recovered from the Lion Air jet that crashed into Java Sea at Tanjung Priok Port in Jakarta, Indonesia, Saturday, Nov. 3, 2018.

JAKARTA, Indonesia — New details about the crashed Lion Air jet’s previous flight cast more doubt on the Indonesian airline’s claim to have fixed technical problems, as hundreds of personnel searched the sea for a fifth day Friday for victims and the plane’s fuselage.

The brand new Boeing 737 MAX 8 plane plunged into the Java Sea early Monday, just minutes after taking off from the Indonesian capital, Jakarta, killing all 189 people on board.

Herson, head of the Bali-Nusa Tenggara Airport Authority, said the pilot on the plane’s previous flight on Sunday from Bali requested to return to the airport not long after takeoff but then reported the problem had been resolved.

Several passengers have described the problem as a terrifying loss of altitude.

Lion Air, a budget carrier that is the biggest domestic airline in Indonesia, has said the unspecified problem was fixed after Sunday’s flight, but the fatal flight’s pilots also made a “return to base” request not long after takeoff.

Read Next
Loving and living