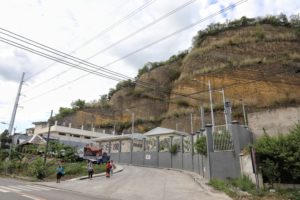 The Naga City Jail is declared unsafe for occupancy by the Department of Environment and Natural Resources in Central Visayas (DENR-7) as it sits within the landslide danger zone. CDN PHOTO/TONEE DESPOJO)

Over 400 prisoners will be evacuated

Even the inmates in Naga City jail need to be evacuated.

This was the conclusion reached by local government and environment officials after the Department of Environment and Natural Resources (DENR) recommended to the city government of Naga to create measures to stabilize the slope behind Naga City Jail, located at Barangay Naalad.

The jail compound is within the one-kilometer radius of the ground zero of the massive landslide that buried 57 houses and claimed 78 lives, with six persons still missing to date.

Ground zero is so close to the jail compound that the moment the landslide hit, which occurred at around 6 a.m. of September 20, 2018, it was captured by the CCTV mounted on the second level of the two-storey jail building. The same video has since gone viral.

The landslide-affected area covered 80 hectares that wiped out most of two sitios in Barangay Tinaan, displacing 8,262 individuals, many of whom are still staying in city-run evacuation centers as it is still dangerous for them to return to the affected areas.

Residents living along the one-kilometer radius of the landslide’s ground zero in Sitio Sindulan, Barangay Tinaan have previously been evacuated and are now among those housed in the city’s evacuation center.

In a press briefing last Monday, Naga City Mayor Kristine Vanessa Chiong said they are coordinating with the Bureau of Jail Management and Penology (BJMP) for the transfer of the inmates while the city government works on measures to stabilize the slope.

Chief Supt. Arnold Buenacosa, regional director of the Bureau of Jail Management and Penology (BJMP), said the inmates will temporarily be transferred to the Cebu City female dormitory.

“They will be transferred, most likely by the end of the month (November) to give way to the stabilizaton of the slope near the jail,” Buenacosa told Cebu Daily News in a phone interview.

Buenacosa said he already received a communication from the city government of Naga regarding the need to temporarily move the inmates while the local government unit is working on measures to stabilize the slope behind the penitentiary and prevent risks of landslide in the area.

Buenacosa added that the safety of the over 400 inmates of the Naga City Jail is a paramount concern for the bureau.

The inmates, Buenacosa said, will be made to occupy the old building of the female dorm of the Cebu City Jail compound in Barangay Kalunasan in Cebu City.

This as the present occupants of the old female dormitory building will also be moving to the newly constructed building in the Cebu City Jail compound.

Buenacosa said the Naga City Jail inmates may need to stay in the female dormitory for at least two months.

In the communication sent to BJMP by the Naga city government, Buenacosa said the LGU asked for at least two months to complete technical works to stabilize the slope.

While the inmates stay in the facility in Cebu City, Buenacosa said the Naga City government promised to continue to provide funds for the meals and other expenses of the inmates.

Apart from coordinating with the BJMP, Chiong also sent a formal letter to Gov. Hilario Davide III in the hope that some of the inmates may also be accommodated at the Cebu Provincial Detention and rehabilitation Center (CPDRC).

Davide, however, said in a separate interview on Tuesday that it may be difficult for the province-run jail facility to accommodate the inmates from Naga City Jail since CPDRC itself is congested.

CPDRC warden Reynaldo Valmoria has already announced last August that they will stop accepting inmates at the provincial penitentiary.

CPDRC currently houses over 3,900 inmates or more than twice of its capacity of at most 1,500 persons.

“But we will check with the warden. Maybe we can accommodate some and then tap other LGUs who can possibly cater to them,” Davide said.

The Cebu City Jail male dormitory, also located in Kalunasan, also expressed reservation should they be asked to accommodate the Naga City Jail inmates. Cebu City Jail Warden, Jail Superintendent Renante Rubio, however said they will leave the decision to the officials of BJMP Central Visayas (BJMP-7). Cebu City jail’s male dormitory currently houses over 4,900 inmates, which is triple its ideal capacity of 1,600.

But Buenacosa assured that all the inmates in the Naga City Jail can be accommodated in the old building of the female dormitory and that there would be no need to distribute them to other penitentiaries.

There is enough room for them),” Buenacosa said. /WITH REPORTER MOREXETTE MARIE B. ERRAM