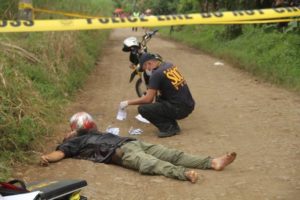 A SOCO personnel collect cash that were used in the gun buy bust that led to the death of Muslim convert militant Joseph Anulga Jr., a.k.a Dawud in Ormoc City.

Ormoc City – A suspected gunrunner linked to a Muslim extremist group was killed when he reportedly resisted arrest during an operation by the Criminal Investigation Detective Group of the Philippine National Police in Eastern Visayas along Sitio Lawis, Barangay Airport, this city at about 8 a.m. on Thursday.

Chief Insp. Elmer Pedere, chief of the CIDG in northern Leyte, identified the suspect as Joseph Anulga Jr., a.k.a Dawud, a Muslim convert and a resident of Sitio Lawis.

The suspect allegedly resisted arrest and allegedly pulled a caliber .45 pistol and tried to shoot it out with the CIDG operatives.

But other operatives who acted as security to the gun buy bust operation shot the suspect ahead, resulting to his instantaneous death.

Recovered from Dawud was a .45 caliber pistol that was being procured by the CIDG operatives amounting to P10,000; another caliber .45 pistol from the possession of the suspect; and the P10,000 cash used in the buy bust.

Brig. Gen. Lope Dagoy, commander of the 802nd Brigade based in the province, said in a statement that Dawud was a suspected Dawlah Islamiyah (DI)-affiliated terrorist cell in Ormoc City.

Dagoy said that Dawud was an Islamic convert who had pledged allegiance to Daesh (Islamic state of Iraq and the Levant) and its recognized caliph, Abu Bakr Al Baghdadi. Dawud was also set to go on a “Hijrah” (migration) to join the local terrorist groups at any camp in Mindanao and intended to die there as a martyr of Islam.

Dawud was reported to the military and police by residents of Ormoc City for recruiting locals to convert to Islam, Dagoy said.

He said that Dawud was a direct associate of the late Yusuf Macuto who was involved in a foiled plot to bomb the US Embassy in Manila last November 2016 and the main suspect in the Hilongos, Leyte bombing last December 2016, but was killed during the Marawi siege.

Read Next
Centcom has new chief