Mahiga Creek Park: A park made of recyclable materials unveiled 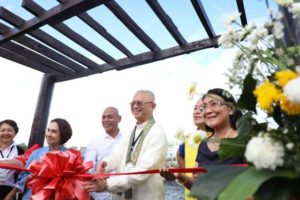 AS THE 4th International River Summit was held at the Radisson Blu Cebu, the Cebu City government also unveiled on Thursday (Nov. 22), the Mahiga Creek Park at Block 22 at the North Reclamation Area in Cebu City.

With recyclable materials being used in building the park, the Cebu City government only spent P50,000 to build the park project which was initiated by the Cebu City Environment and Natural Resources Office (CCENRO).

Ma. Nida Cabrera, CCENRO head, told reporters in an interview after the event that aside from the project only being built for P50,000, CCENRO workers also created the park in three days.

Aside from the unveiling of the park, CCENRO led by Cabrera also turned over the Mahiga Creek Park to the city’s Parks and Playgrounds Commission headed by Dr. Librado Macaraya.

The Parks and Playgrounds Commission will now take care of the newly-opened park.

In a speech, Macaraya said his department promised to improve Mahiga Creek Park in the future. 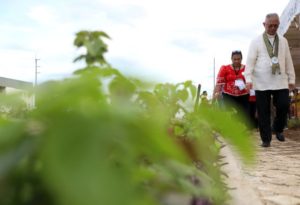 The park features a pathway made from eco-pavers or concrete bricks made from the mixture of broken glass and cement, chairs and tables made from recycled bottles, and a wooden arch.

Ornamental plants and flowers also lined up the pathway.

Aside from Cabrera and Macaraya, the event was also attended by Cebu City Councilor Margarita Osmeña, and Cebu Archbishop Jose Palma, who also attended the 4th International River Summit earlier in the day.

Meanwhile, Palma expressed gratefulness for the efforts of Cebuanos to restore Mahiga Creek to its former glory.

“Makaingon gyud ta nga (We can really say that) what used to be creek, now, it’s being cared and wala na nato nabiyaan (we didn’t abandon it). We beautified it with plants. Even just looking at the flowers and plants, it would be a very different feeling,” said Palma.

“And it’s heartwarming that what we’re talking about in the river summit is being implemented here,” he added.

Read Next
‘Clean rivers or you’ll be fired’