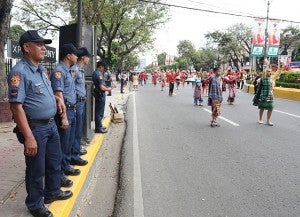 The Police Regional Office in Central Visayas (RPO-7) will again be asking telecom companies to shut down their mobile phone signals in Cebu City and neighboring areas during the Sinulog 2019 celebration.

If implemented, this will already be the third year that mobile phone signal shut down will be implemented during the festivity that is expected to draw thousands of devotees for the religious activities and the Sinulog grand parade.