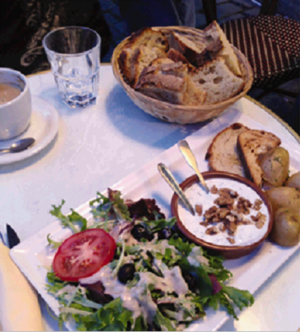 ALTHOUGH most of us use the broad French Cuisine tag and description to describe French food, most French dishes are actually region-based and thus depending on where you are actually located.

Here are three dishes/ delicacies I encountered in my recent trip to France.

For years, the 11th and 12 arrondissements municipaux, the City of Paris which is divided into 22 administrative districts, this two formerly quiet, working class neighborhoods in eastern Paris, have been the preferred location for the French capital’s best young chefs.

Unfortunately, I had to skip two important gastronomic invitations—the Parisian 3-Michelin stars Ledoyen and the oldest restaurant in Paris Au Vieux Paris— to visit Lourdes and experience a more profound peace not felt before.

After an overnight stay and copious prayers for family and friends and a quick dip into the cold healing waters of Lourdes we boarded a high speed train back to Paris arriving at 7 in the evening. 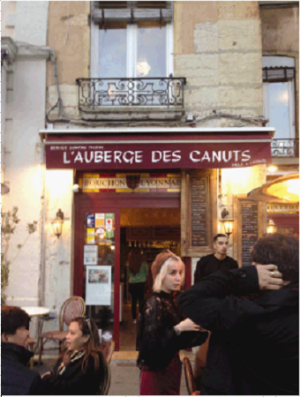 In the evening I had plenty of time instead to relish and enjoy well-liked culinary pleasures before embarking on my planned journey to some French medieval towns.

I did not waste time, but from my hotel I walked towards Montmarte in the heart of the neighborhood within the 18th arrondissement. Even at night the most important structure, Basilique du Sacre Coeur, a minor basilica dedicated to the Sacred Heart of Jesus, built during 1870 and consecrated only in 1919 was beaming with people, I guess, mostly tourists.

I took the funiculaire and from the street level it took me around 1 minute and 30 seconds to reach the top, as an option instead of climbing the more than 300 steps towards the white-domed basilica. Upon reaching the top one should be able to see a 360-degree unobstructed view of the City of Paris and, yes, a beautiful sight of the Eiffel below.

I did go in the basilica and prayed a bit inside, and as I was getting hungry I thought of Pablo Picasso, Vincent van Gogh, Modigliani and the founder of Cubism—Barque and a whole crowd of impoverished writers perhaps dinning at one of the many restos before heading down towards the Moulin Rouge.

Next thing I found myself sitting at one of the tables of Au Clairon des Chasseurs and for the first time I took an order of my first French foie gras! Though it’s the best place to watch street artists painting and liten to music while catching a glimpse of the background of the Basilica, its not the best place to eat.

A popular and well-known delicacy in French cuisine, its flavor can be described as rich, buttery and delicate, unlike that of ordinary duck liver.

After eating a few bites I must admit I felt a little giddy, light-headed even. I thought I might have inevitably increased my triglycerides after eating more than 100 grams of my order, which must be equivalent to 150 mg of pure cholesterol! I asked for a baguette and some pepper as this is the classic way to eat it, and perhaps I thought it might somehow neutralize
the high cholesterol content thereof.

Or perhaps my tenuous thoughts about gavage while eating, that is the process of force-feeding the ducks with corn using a feeding tube to fatten its liver came rushing into my consciousness. I did keep my thoughts to myself though and tried to reasonably enjoy my foie gras. The plate of foie gras canard came with some red candid and sweetened vegetable on the side.

I was being sensual, in my tongue, of course to nourish my hungry stomach but adventurous as well, as the time of eating was making alive the act of engaging ourselves into the culture of the land.

On next the day I left for the Burgundy region to the north-central France, to a 15th century medieval village of Noyers-sur-Serien. About two hours from Paris by bus I reached the scenic la cité médiévale de Noyers-sur-Serein, dubbed as among the most beautiful villages in France. Many of its old narrow pavements and squares are made of granite and limestone retaining many of its original character.

Beaune, the center of the wine industry was next after Noyers. It was almost lunch when I reached town, so it was imperative to look for a place to have lunch.

My tourist guide recommended that I eat escargot for lunch here. In no time I found the famed Brasserie Le Carnot and ordered immediately the Entrée Chaudes from their menu, of not six but douze escargots! 12 snails, that is! Baked in butter, lots of butter and garlic sauce. Snails are low-fat, rich in protein and a good source of essential vitamins and minerals, especially Vit E and phosphorus.

Land snails are large terrestrial mollusk, air-breathing pulmonate gastropods of the Helicidae family (Helix, pomatia, Helix aspersa and Helix lucorum), similar to our takyong (Helicostyla daphinis) of Borbon. (One can have this specialty by reservation at Sialo in Cebu.)

Finally before leaving France on my way to Geneva– Lyons, on this last French city, I savored on canut, a word distinctive of Lyons, which dates back to the 19th century. This dish is a base of fromage blanc and seasoned with country herbs and shallots and salt. My canut was sided with fresh greens and baked potatoes. A generous serving of bread was also served. This delicacy was a favorite of silk workers of those times in Lyons working on Jacquard looms. Lamb brain then used to be the food for the rich, but for the poor workers, this was their brain food, the only food they can afford to buy, thus cervelle de canut, literally, “silk worker’s brain.”