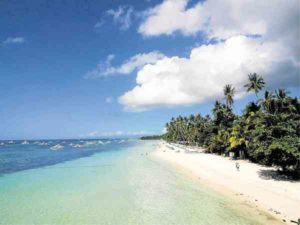 Environment Secretary Roy Cimatu is expected to visit Panglao Island in Bohol province on Tuesday (November 27) to again discuss issues affecting tourism destinations on the island with the different stakeholders.

This will already be Cimatu’s second visit since March where he raised a concern against structures built within the 20 meter easement.

DENR-7 also reported then on the lack of septage treatment facility and “bottomless” septic tanks as contributors to the environmental problems on the island.

In Tuesday’s meeting, DENR-7 Executive Director Gilbert Gonzales is scheduled to give Cimatu and other stakeholders an update “on the environmental compliance of establishments along coastal areas, encroachment of easement zone and water quality assessment results in Panglao Island.”

“With the guidance and support of the four national government agency heads, we firmly believe that we can finally have light in our way towards effective foreshore area management in Panglao Island and the rest of the popular tourist beach destinations in Central Visayas,” said Gonzales.