Too much or too little for Cebu? 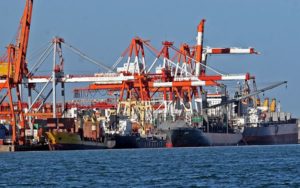 The new Cebu international port project in Consolacion town in northern Cebu will bring more progress and decongest the Cebu City port (above) when the project will be completed in the next couple of years.

At this point, it’s premature to say there’s too many port projects already. Cebu’s port problems are not yet that severe. But in absence of real data, it’s difficult to conclude it is too much or too little.

Three international port projects are in the pipeline for Cebu although it still remains to be seen if these will address the port congestion at the North Reclamation Area (NRA) in Cebu City.

The P10-billion Cebu International Container Port (CICP) by the Cebu Port Authority (CPA) in the northern town of Consolacion has yet to start construction despite already securing funding through official development assistance (ODA) from the South Korean government.

Karen Gonzales, CPA’s senior corporate lawyer, said they were still waiting word from the Department of Transportation (DOTr) on the project’s implementation.

“From what I’ve heard, a condition of the loan agreement with Korea is the identification of a road access network in going to and from the site and relocation site for possible displaced residents,” she said.

But there was still no updates from the Department of Public Works and Highways (DPWH) on the road network requirement.

Among the projects expected to complement the CICP in Consolacion is the P50-billion Metro Cebu Expressway Projec — a 74-km expressway which would connect Naga City in the south to Danao City in the north.

The national government has already allocated P600 million for the first phase of the expressway project. The DPWH in Central Visayas is currently doing parcellary surveys before civil works can be made.

While the CICP in Consolacion, a government project, is still at a standstill, other private investors are also eyeing their own international port projects in other parts of the province.

The Cebu South Harbor and Container Terminal Corp. (CSHCTC), a 100-percent Filipino-owned corporation, will be building a P10-billion international port in Talisay City.

It is seen to cater to containers and break bulk cargo operations.

“It will augment the flow of imports and exports. That will stimulate the growth of industries and sustain the economy of Cebu, with the expected increase in commerce. It will put Cebu in the arena of domestic and international ports, said Johnny Ng, owner-operator of several container yard and ports in Mindanao under Kudos Trucking Corp., in a statement.

Ng and Lucio Co, owner of supermarket chain Puregold Price Club, are two of the majority owners of CSHCTC.

Aside from being a gateway for domestic and international shipping lines, the investors also see a possibility for the port to function as a transshipment port.

The CSHCTC aims for their new port to help decongest the existing CIP by providing another choice for port users, shipping lines and shippers.

The project, which recently broke ground, already has an approval from the CPA.

Backfilling and construction is set to begin in early 2019 and is targeted to be completed by the second quarter of 2022.

“This port project will encourage even more economic development in Cebu. This new container zone will help ease traffic congestion away from the city center,” said Presidential Assistant for the Visayas Michael Dino during the project’s groundbreaking ceremony.

Another privately funded international port project is being proposed in the southern town of San Fernando.

First Sangat SF International Port Corp. is investing P12 billion for the port project which includes the reclamation of around 23 hectares of seawater.

However, the project is currently stalled in a legal war after San Fernando Mayor Lakambini Reluya earlier issued a cease and desist order against the project saying that it had lacked some mandatory requirements.

Cebu business leaders said these international ports were a welcome development but these must be backed with studies and data.

Cebu Chamber of Commerce and Industry (CCCI) President Antonio Chiu said that without concrete data, it is hard to conclude whether these port projects are enough or too much already.

“At this point, it’s premature to say there’s too many port projects already. Cebu’s port problems are not yet that severe. But in absence of real data, it’s difficult to conclude if sobra na or kuwang ba (it is too much or too little),” Chiu said.