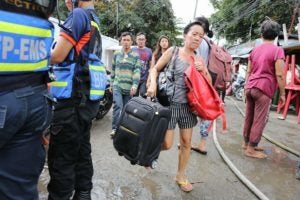 A woman tried to save her belongings from the fire that razed a densely populated area in Barangay Kamputhaw, Cebu City. | Photo by Junjie Mendoza

At least 70 houses were razed by a fire that hit a highly residential area in Purok 3, Barangay Kamputhaw, Cebu City on Wednesday morning (December 5).

The Bureau of Fire Protection in Central Visayas (BFP-7) estimated the damage at P1 million.

It was later raised to a Task Force Alpha at 10:45 to mobilize firefighters from neighboring local governments.

Cebu City Fire Marshal Noel Ababon said that houses burned from the fire were made of light material.

On the other hand, the city’s Division of Welfare and the Urban Poor (DWUP) found out that the site razed by the fire is owned by the University of the Philippines Cebu (UP Cebu).

DWUP operations officer Genevieve Alcoseba said their office is planning to negotiate with UP Cebu representatives to allow the city government to do a reblocking in the site.

“We’re trying our best to allow the fire victims to reconstruct. That’s why we will be reaching out with UP Cebu,” said Alcoseba.

Your subscription could not be saved. Please try again.
Your subscription has been successful.
Read Next
How our obsession with these ‘pricey’ planners is contributing to the slow death of our environment