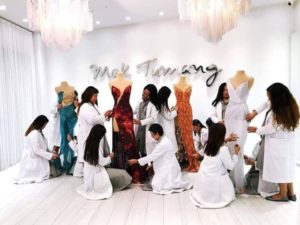 Tumang was responsible for Gray’s iconic gowns: “Ibong Adarna” which Gray wore during the preliminary competition and the “Mayon” gown which she wore on pageant day, December 17, where she was declared as the winner.

The blazing orange gown was inspired by the mythical bird, Ibong Adarna.

The fiery red gown, which wowed the audience at the Impact Arena in Bangkok, Thailand, pays tribute to the Mayon Volcano.

“Catriona can be considered as the modern-day Daragang Magayon. She embodies the Filipina’s beauty, intelligence and burning passion,” he wrote.

Tumang shared a photo of four gowns including the “third gown” which he called “Perla Oriente” that Gray did not get to wear during the Thai Gala Night.

Gray wore the white gown during an endorsement shoot with one of the sponsors.

The date is yet to be set but Tinio said that there will be an “exhibit of the Mak Tumang gowns worn by Miss Universe 2018 Catriona Gray and more.”

“Watch out for it!” wrote Tinio, who early on expressed his confidence on Gray’s victory to take home the Philippines’ fourth Miss Universe.