The good, the so-so and the stinky 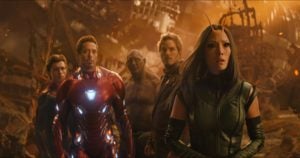 Someone should just overnight mail the Academy Award for Best Actor over to Rami Malek for his flawless performance as the late (and great) Freddie Mercury. The last 22 minutes of Queen’s performance at Live Aid 1985 is THAT good with a big BRAVO to director Bryan Singer.

A chilling retelling of the horror of the Nazi War Machine and its atrocities against the Jews (amongst others) told by those few brave survivors still left.

People of color are finally given their just do in this regal tale of royalty and family. Wakanda Forever!

Can you believe the good guys actually lose? Not only that, 1/2 of everything living in the Universe gets turned into dust. So much for super powers, cape and tights. Bring on Avengers 4!

Director Steven Spielberg breaks out the toys as we journey into infinity and beyond. The segment from “The Shining” and the Overlook Hotel will send shivers down your spine.

Tom Cruise delivers another high octane adventure romp when the IMF crew have to find and disarm two nuclear devices before time runs out.

“The Night Eats The World”

Set in downtown Paris, a down-on-his-luck guy falls asleep in his former girlfriend’s apartment – only to wake up in the middle of a zombie apocalypse. Finally … a thinking man’s movie about the walking dead.

A real yawner with Liam Neeson on board a train filled with–you guessed it–hard working commuters and one mass murderer.

Chris Hemsworth comes down his Asgardian throne and leads a bunch of US Army do-gooders against the Taliban in Afghanistan in the aftermath of the terrorist attacks in New York City on September 11th.

Too much profanity and too little action in the continued adaptation of the Deadpool comic books from MARVEL. Ryan Reynolds really, really tries hard to inject his own unique brand of humor but falls flat.

A great flick for the kids as we follow the super-powered Parr family with the emphasis this time on Mom–Elastigirl–as dear old dad stays home to change poo poo diapers.

The dinosaur island gets flattened when a volcano blows its top. Boring addition to the “Jurassic” franchise but thankfully the bad guys are eaten.

Why in the world is any movie starring Natalie Portman not a sure fire hit? When Ms. Portman along with four other female victims cross over into the unknown.

Okay, so giants are real, they terrorize one neighborhood after another and you can shoot to kill? An interesting premise that unfortunately (like Deadpool 2) is less about action and more “thought control” babble.

We can all take solace in knowing there will never, ever, be another “Mama Mia” film. A completely worthless piece of stinking horse pudding as Cher (yes she is still alive) staggers upright before the screen to screech out a song from ABBA.

By far the worst sci-fi film of the year where the heroes swallowed their stupid pills before filming their scenes.

How can you make a bad movie about an action hero from the Bible? Just cast the Taylor James in the title role as the super-strong Nazarite. The book is better!

Another pointless remake with Bruce Willis in the title role of a surgeon by day who turns vigilante at night (sans cape and tights).

Jennifer Lawrence sleepwalks her way through to another fat paycheck as a Russian waif turned super criminal and murderer.

If it is possible to make an animated cartoon about vampires, werewolves and monsters that puts five year olds to sleep–this one certainly fits the bill. My little ones fell asleep within the first 23 minutes.

A prehistoric shark gobbles up people at random. Ah … sure. Only one interesting scene when the shark jumps over the boat sent to capture it. The rest? Ah not so much.

More “Hans Christian Anderson” than Disney cartoon is a hideous, mind-numbing film that will turn your brain into strawberry jelly long before it ends.