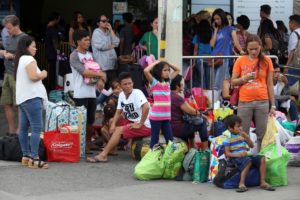 Stranded passengers bound for Ormoc City and Leyte anxiously wait for any announcement from the Philippine Coast Guard regarding their trip at the Terminal 1 of Pier 1 in Cebu City. CDN PHOTO/JUNJIE MENDOZA

Several sea trips have already been cancelled, buses are being readied to ferry passengers who might be stranded while disaster officials and the police are on heightened alert for Tropical Depression “Usman” which is expected to wreak havoc in Cebu starting tonight.

especially the northern portions of the province, is now bracing for the impact of “Usman” which is expected to intensify into a Tropical Storm anytime today, Friday (December 28).

Usman, the 21st major weather disturbance to enter the country this year, is also expected to pose another problem to the close to 3,000 individuals who lost their homes to a fire that struck last Christmas in Barangay Duljo Fatima, Cebu City.

Yesterday, barangay and city government officials implemented a forced evacuation for residents temporarily sheltered in the village’s gymnasium which gets flooded during a downpour.

Elmer Abella, Duljo Fatima barangay captain, said they have to transfer the fire victims to their barangay hall and to the San Nicolas Elementary School where they are safer.

Members of the Philippine National Police (PNP) are also on standby, ready to assist those who will be affected by the incoming bad weather.

At least 567 passengers were stranded in the ports of Cebu and Bohol after the Philippine Coast Guard in Central Visayas (PCG-7) ordered the cancellation of sea travels to northern Cebu (Bantayan Island and Camotes Island) and to provinces in Eastern Visayas such as Samar and Leyte.

State meteorologists from the Philippine Atmospheric, Geophysical and Astronomical Services Administration (Pagasa) said the eye of Usman was located at 410 kilometers east of Guiuan, Eastern Samar as of 4 p.m. yesterday.

Pagasa also projected Usman to intensify into a Tropical Storm anytime today. It is moving westward with a slower speed of 10 kilometers per hour (kph) from 15 kph during their last update.

Usman is packing winds of up to 55 kph, with gustiness of up to 65 kph.

Engr. Alfredo Quiblat, chief of Pagasa-Mactan bureau, said “Usman” is expected to make its first landfall in Guiuan, Eastern Samar around 5 p.m. to 8 p.m., and another one within the vicinity of northern Cebu around 10 p.m. to 11 p.m., tonight.

“Duna gihapon chance nga mo-landfall dinhi sa northern Cebu tungod kay nipaubos iya agianan. (There is still a chance that the tropical depression will make landfall in Cebu because of its downward trajectory),” he said.

Quiblat said the whole of Cebu province will start experiencing light to moderate rains starting Friday night which can cause flooding in low-lying areas.

“We are expecting less winds but light to moderate rainfall, about 60 to 80 millimeters volume of rain in 24 hours. This is enough to cause flooding in lowland areas,” he added.

But if Usman’s direction continues to change, Quiblat said it may make another landfall in the central part of the province.

“While northern Cebu has the highest risk of landslides and flooding, Metro Cebu has to be ready because if Usman continues to move southwest, it may landfall in central Cebu,” he said.

Since 8 a.m. yesterday, Pagasa has hoisted Storm Signal No. 1 in northern Cebu including the Camotes group of islands and 17 other areas in the country.

These are Romblon, Catanduanes, Camarines Sur, Albay, Sorsogon, and Masbate including Ticao and Burias Islands in Luzon; Eastern Samar,

On the other hand, Quiblat said Cebuanos can expect improved weather this weekend, and that travelers may be allowed to return to their hometowns to celebrate the New Year, which is this Tuesday.

“By the time the eye of the storm passes over Cebu, the weather will start to become better,” said Quiblat.

Meanwhile, Abella said they have asked the assistance of the City Disaster Risk Reduction and Management Office (CCDRRMO) in explaininig to the fire victims staying at the Duljo Fatima gymnasium why it is imperative for them to transfer to the San Nicolas Elementary School or in the barangay hall.

(We told them that water will definitely enter the gym when there’s a downpour. Some of them were hesitant to transfer to San Nicolas Elementary School because it is farther from the barangay)

Rescuers were also directed to relocate fire victims who have set up temporary shelters near the fire site.

Meanwhile, at least 10 Kaohsiung buses are being readied for deployment to help ferry passengers who may get stranded in flood-prone areas in the city.

Cebu City Transportation Office (CCTO) operations chief, Francisco Ouano, said five buses will serve the city’s north district while the other five will be stationed in the south district.