Ex-convict, cohort jailed for possession of P1.8M worth of shabu 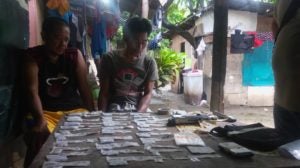 A man who has been jailed twice for frustrated murder and illegal drugs possession cases was again arrested by the police early on Friday morning (December 28) for the possession of P1.8 million worth of suspected drugs.

Jefferson “Jepjep” Gallarde,47, was arrested in a joint buy-bust operation by the Provincial Intelligence Branch (PIB) and the Provincial Drug Enforcement Unit (PDEU) in his residence in Barangay Dumlog, Talisay City.

Police also collared his cohort who was identified as a certain Eutemio Hervas,42.

Both Gallarde and Hervas are residents of Sitio Hervas, Barangay Dumlog, Talisay City.

Senior Insp. Alejandro Batobalonos, PDEU chief, said that Gallarde was detained in 2007 for attempting to kill a retired army but was released from detention a year after.

He was again jailed in 2010 for drugs distribution and possession but was released in 2012 after he posted bail.

Batobalonos said they placed Gallarde under surveillance for almost a month after they received information that he has resumed his illegal drugs business.

The police team confiscated 5 large, 29 medium and 4 sachets of suspected shabu weighing 270 grams and one large pack of dried marijuana leaves of still undetermined amount during their operation.

Read Next
More passengers stranded in Cebu, Bohol ports as TD ‘Usman’ gets closer to the Visayas