WE ARE CDN SPORTS 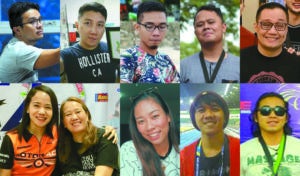 We have told stories of countless triumphant athletes; today we tell our story

For the past 20 years, we at the Cebu Daily News (CDN) sports section have become one of the most trusted sources of sports news in
Cebu.

The crew behind the section is among the best in the business, with some of our writers winning awards in different sportswriting competitions.

We have dominated coverage of the Cesafi, Cebu’s premier inter-collegiate multisporting league, coming out with exclusives and unique human interest stories not only in basketball but also in other events such as volleyball, football, beach volleyball and even its academic and cultural events.

Today, as our print edition reaches its final issue and begins a new journey in the digital arena, we honor the talented and promising sportswriters behind those award winning stories and scoops.

We have given you, our loyal readers, stories of triumph over adversity like only for Cebu’s sole independent newspaper can.

Allow us the chance to tell our stories this time.

I am very thankful that I was part of the CDN sports team for almost 10 years. I am proud of every article that bore my name not only in the sports pages but also some that made it to the front page of the paper.

My stint with CDN started in 2009, my first article was a 100-character article about a barangayan basketball league. From that time on, I got hooked into the job and started to develop the passion for sportswriting.

But my stint would have not been possible without the guidance and mentoring of Rick Gabuya, the man responsible for what the section is now.

He introduced me to sportswriting back on January 5, 2009.

Although it was a struggle in the first few years in the job – especially since I had no background in journalism, I slowly honed my skills in sportswriting with the help of sir Rick.

I did have my share of bad days in the newsroom and on the field, but all of these I considered a part of the learning process that eventually made me a better writer, one who would eventually win several sportswriting contests.

One thing I learned from my stint with CDN which I will always cherish is that everyone can be a writer as long as you develop a passion for it.

Although this is not goodbye because CDN is here to stay, albeit on a new platform, parting is excruciating because you’re not saying so long to colleagues, not even friends, but you’re parting with FAMILY.

Yes, the CDN sports team is a family. This year is the third time that I returned (I’m the prodigal tita) and indeed the third time is a charm. It has been my best year so far and I can’t thank my editors, sir Rick and Brian, enough for the trust that they give me each time.

I have matured so much as a journalist, especially when I became part of the CDN Sportstalk, because of that trust, thus I will forever be indebted to them for that. I often act as the mother figure in the squad but in truth I am a spoiled brat in this team.

I also can’t thank enough the rest of the team — Jonas, Dale, James, Rab and especially Chang, whom I displaced in the football beat. And, of course the newbies, Julia and Hendrix, for listening and allowing me to guide them.

A memory that I will always cherish about CDN Sports is how I had never felt the years that I’ve been away, it’s like I never left.

And, what I love about this squad is the teamwork, which strongly comes into play during multisporting events coverage such as the Philippine National Games, as well as the Ironman, Cesafi, etc. I also love how the group is not only open to suggestions but also to adapting them.

I am honored to be part of CDN Sports. To be part of this team is quite an achievement. Like I said, this is not goodbye, so looking forward to working with you guys again, someday.

Goodbye is never easy to say. Most especially when it’s to a place you’ve penned stories to for 14 years. Not when it’s to an institution that helped unlock a young man’s hopes and dreams of becoming a journalist.

And yet here we are.

Thank you, Mr. Enrico Gabuya, for bringing me on to the team back in 2004 and giving me enough leash to make mistakes, learn from them and be the best writer that I could be.

Big thanks to Cebu’s basketball community — it is truly an honor and a privilege to write about your games and share your stories to our readers. The trust that you’ve bestowed upon me to take your opinions, your life’s stories and translate it into articles is something that I will always hold dear, no matter where my next step takes me.

To my colleagues, especially Brian and Mars, thank you for helping lead the page to where it is right now — arguably the best in Cebu.

And to every single person who has taken the time to read our articles for the past 20 years, thank you.

Being part of the CDN sports team is like being part of something huge, far greater than what I expected.

I became part of another circle of friends, became a member of another family, and became a protege of smart and good people.

When I first wrote for the team, I applied the things I learned as a mass communication student, the basics of news writing: who, what, when, where, why and how. Having read my colleagues’ write up, it was too far off. I was ashamed.

“Do not just write news, write stories,” was what our sports editor Brian Ochoa taught us. So instead of delivering just mere results to the readers, I learned to dig deeper. I learned to do stories from the athletes’ point of view. We went the extra mile and came up with storylines that were different and way better from the others. This is the CDN difference.

Thank you, CDN. Much love from the North….Reclamation Area.

I took up a journalism and communications course because of my passion for sports writing. I was in my third year in college when our chairman and former Cebu Daily News editor, Dr. Nestor Ramirez, called me in the middle of a thesis defense of a group of students to tell me that CDN was looking for new writers.

I never hesitated and said okay immediately, excited of the rare opportunity to be able to write for the paper.

In October of 2015, I started to find meaning in my life when I officially became a correspondent for CDN.

The unforgettable coverages, the friends I made, the extra-curricular dance practices, the camaraderie between me and my fellow writers, and the knowledge, kindness and confidence I received from my editors — everything was life-changing. It was so special. I felt happiness in my heart every day whenever I see my byline or some random stranger read our paper flipping through the sports pages.

But what makes CDN more special and endearing to me are my editors, senior reporters, and fellow writers, especially Dale Rosal, James Savellon, Cebu Libre writer Dafne Wenceslao and then fellow correspondent John Carlo Villaruel for the special bond we created at CDN.

I will never forget those sleepless IronMan coverages and everything that came after. Our ride was extremely fun.

I may be busy sometimes with flying school that I don’t get to write as frequently as I do before, but journalism runs in our blood and I know that Siloy’s nest will always be there for us wherever, whenever, and no matter what.

I became a young sportswriter who had the best memories with CDN, with fellow writers such as Glendale Rosal, Rabboni Borbon, and Ray Charlie Diaz. We thrived, had fun together, and got scolded by our editors especially during the last three IronMan coverages in Cebu.

But being mentored by tenured journalists, especially from Rick Gabuya, Brian Ochoa, Mars Alison and Glendale Rosal, was such a humbling experience worth treasuring. They respected me and saw my potential as a career person. CDN will always have a special place in my heart and mind.

I am thankful given the opportunity to write feature sports stories. Being part of CDN’s sports team is an unplanned achievement that I will always

take pride in my lifetime.
I thank the Higher One for leading me into this path and enriching me with experiences thru media coverages and meeting new people.

Juggling with the architecture profession and writing feature stories is a struggle but I’m fortunate that I have CDN’s support and guidance.

I am lucky I have ate Mars for her nurturing nature, sir Brian for his quick tips and points; and sir Rick for his kind and firm disposition.

I also have sir Jonas, whose sports writing skills prove formidable and serve as one of the legit references I read for writing better features.

Likewise for Dale, Ray, Rab and Julia’s optimism and open arms in imparting their time, effort and friendship to this madman-minded person named Hendrix. I also came to know James, the only one who was brave enough to try with me soju during our Christmas party.

I say I found another set of family in CDN. And it’s more special because I have genuine people as my brothers and sisters.

I remember my parents’ fondness with the ‘Siloy is watching’ section of the Cebu Daily News prints until they diverted this fondness to the sports section to read the few pieces that I have contributed.

If there was one word to describe Cebu Daily News and its journalists, it would be passion. It is evident in the eyes and hearts of the family who chose to embrace and support local sports first, as every Cebuano should.

The passion burns in every word written and every statement shared and I couldn’t be more grateful and proud to have immersed myself in such passion that I’m sure will get me through any task.

When I approached Mr. Brian Ochoa and Ms. Mars Alison and asked for the opportunity to write, I was given not only a pen but a new perspective — not one limited to the lines of the court where I have spent most of my life but beyond those where I can tell the world about the sport I love. While we tread our life paths, I always seek to discover different angles of the journey. Thanks to Cebu Daily News, I was given one for the road.

As this is the last issue, goodbye is too hard to say to a Cebu constant. Instead, I would only like to say that we have been subscribed to Cebu Daily News for so long and without the CDN newspaper at our doorstep, our mornings at the breakfast table will never be the same.

Read Next
Angelina Jolie doesn’t rule out move into politics