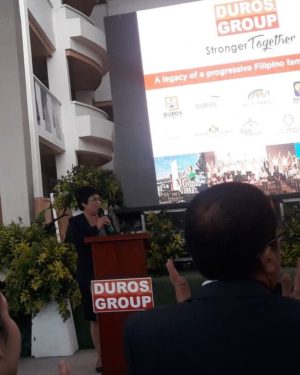 Liloan, Cebu, Philippines – After partnering with Japanese companies for a golf course and a retirement village in Liloan town in northern Cebu, Duros Land Properties Inc. (DLPI) is now under negotiations with a Chinese company for a hotel development on Panglao Island, Bohol.

The hotel will sit on a 3,000-square meter property outside the Bohol-Panglao International Airport, according to Rafaelito Barino, chairman of the Duros Group of Companies.

Duros Group is the umbrella entity of 11 companies including DLPI.

Barino said the hotel will be completed on the first half of 2020.

Barino revealed the name of its potential partner as Hang Lü Group from Chongqing, China.

“(The agreement is), we build and then we (will) accept the offer to lease the whole space including hotel operations,” he told reporters after the State of Duros Address on Friday, January 4, at the Divine Life Institute of Cebu in Liloan, Cebu.

Barino said the idea of partnering with the Chinese group started out as an exploratory project when they expressed their interest to help develop the Panglao airport.

“We lost in the airport bid. We lost but then we won (because of the hotel project),” said Barino.

Barino added that DLPI’s sister company, Regent Property Management International Inc., will be involved in the property management side of the business.

“We asked the HLURB (Housing and Land Use Regulatory Board) if we can do it as a condotel. They said ‘yes’,” said Barino.

The condotel concept means that the building is constructed as a condominium but will be operated as a hotel that offers both short-term and long-term stays. It will also maintain a front desk.

Barino said the same group is also leasing one third of the space of the plenary hall of IC3 Convention Center, which is located in Cebu City, and was also developed by Duros.

IC3 is the largest convention center outside of Metro Manila, which can accommodate at least 10,000 persons.

This partnership with another international company comes after Duros sealed deals with Japanese companies in running a language school and in the development of a retirement village in Liloan for the Japanese market.

The Liloan Golf and Leisure Estate also partnered with Brick and Wood Golf Club of Muirhead Fields in Chiba, Japan to give playing rights to members of their golf clubs. bjo