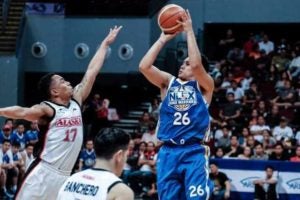 CEBU CITY, Philippines – Cebuano guard Macmac Tallo will remain with the NLEX Road Warriors after he signed a one-year contract.

A former two-time MVP of the Cesafi, Tallo was picked 10th overall by the Talk N Text KaTropa during the 2017 PBA Draft. However, he was released and got picked up by an NLEX team that needed backcourt help following the suspension of Kiefer Ravena and the knee injury of Kevin Alas.

It was with NLEX that Tallo got to showcase his game as he ended his rookie season with averages of six points, two rebounds and three assists. More importantly, it was enough to gain the trust of head coach Yeng Guiao who signed him off on the one year deal.

Tallo, who is the son of one time PBA player Mark Tallo, vowed to give his all and earn his minutes even with Ravena set to be reinstated this season and Alas already making strides in his recovery from the ACL injury.

“Sobrang saya ko na kahit one year lang binigay sa akin. God answered my prayers. Masaya na ako dun. Pero di ako makokontento dito. I’m still in progress marami pa dapat matutunan. Hindi ako natatakot if nandyan na si Kevin or Kiefer kasi that’s part of life and that’s the nature of basketball. Yung tipong how will you compete with them or against them. So ayun this year is crucial and challenging for me. 120% every practice and and every game,” Tallo said. /rcg