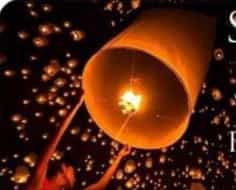 A portion of the promotional material for the now cancelled Sinulog Lantern Festival of Cebu’s La Vie in the Sky restaurant.

CEBU CITY, Philippines —  The La Vie in the Sky restaurant has cancelled an event were they would have  released hundreds of sky lanterns as part of their Sinulog party.

La Vie chief executive officer Louis Thevenin said they posted the advertisement on their Facebook page but within an hour they received complaints from netizens.

“We immediately cancelled the event,” said Thevenin, who also designed La Vie in the Sky and La Vie Parisienne.

La Vie in the Sky is located in Cebu City’s  mountain barangay of Busay, while La Vie Parisienne is in Barangay Lahug in uptown Cebu City.

Thevenin said it was not their intention to pollute the environment.

“We were not aware of the danger and we thank the people of Cebu for reacting,” he said.

Thevenin said the company cares for the environment. He said they collect rainwater and recycle the water for use in their toilets.

He said La Vie in the Sky’s Sinulog party will still push through without the sky lanterns.

“We will instead have a French DJ on the roof top, buffet with free flowing wine. Our passion is to please the people of Cebu! We follow the desire of our clients because we are here to serve them,” he said. /elb

Read Next
Grandma, 2 granddaughters die in a residential fire