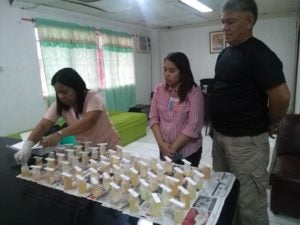 A surprise drug test was conducted at the CPDRC on Wednesday, January 9, 2019.

Cebu City, Philippines – Fifty-eight personnel of the Cebu Provincial Detention and Rehabilitation Center (CPDRC) started the year right as none of them were found positive for illegal drug use after a surprise drug test conducted by the Cebu Provincial Anti-Drug Abuse Office (CPADAO) on Wednesday morning, January 9.

This is the first drug testing conducted inside the facility in 2019.

Reynaldo Valmoria, CPDRC jail warden, said he is delighted to know that none of his personnel failed the test.

“I have constantly reminded them nga do not be involved anang butanga gyod kay it will ruin your life,” said Valmoria.

The drug testing, which was conducted around 9:30 a.m., was given to all personnel on duty at that time. These included jail guards, blue guards, administration staff and utility personnel.

Valmoria said the remaining 98 employees from the 3 p.m. to 11 p.m. and 11 p.m. to 7 a.m. shifts who were not subjected to the drug test will have their turn in the coming days.

He added that it will be upon the discretion of CPADAO when to  conduct the surprise drug test.

Valmoria also said that since November 2018, all of the 124 inmates who were subjected to drug testing as a requirement for their plea bargaining agreement have tested negative for illegal drugs. /bjo