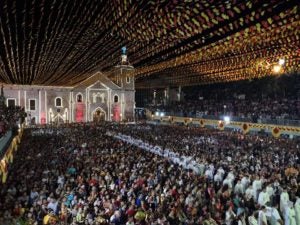 Devotees wait for the start of the first novena mass at the Sto. Niño Pilgrim Center of the Basilica Minore del Sto. Niño in downtown Cebu City on Thursday, January 10, 2019. | photo by Tonee Despojo

Cebu City, Philippines – For some time, Yancy Lagala was curious as to why multitudes of people are devoted to the Sto. Niño.

“I was thinking maybe there’s really something that draws people to him,” said the 18-year-old man.

He later found the answer.

“I experienced his goodness. He helped me overcome life’s challenges, and that’s the greatest gift the Sto. Niño gave me,” he told Cebu Daily News.

For three years now, Lagala serves as an altar server of the Basilica Minore del Sto. Niño and is currently the liturgist of the centuries-old church.

“The youth need to find God in their hearts in order for them to see what peace really means,” he said.

Abarquez,  a senior high school student of the University of San Carlos, joined thousands of devotees during the annual penitential “Walk with Jesus” from Fuente Osmeña to the Basilica Minore del Sto. Niño in downtown Cebu City at 4 a.m. on Thursday, January 10, 2019. 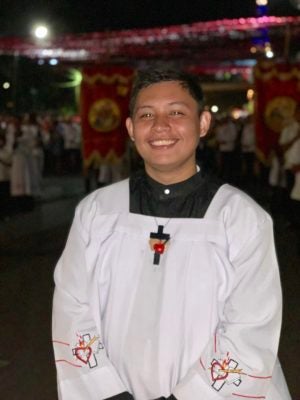 The two-kilometer prayer walk opens this year’s activities in honor of the Child Jesus. 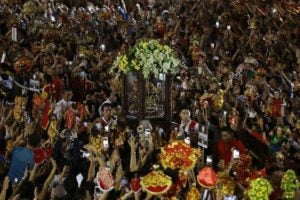 The image of the Sto. Niño arrives at the Basilica Minore del Sto. Niño. | photo by Tonee Despojo

This year’s celebration carries the theme “Sto. Niño: Guide of God’s Children to Service and Humility” which is patterned after the pastoral thrust of the Catholic Bishops’ Conference of the Philippines (CBCP) on the Year of the Youth.

In 2013, the CBCP launched a nine-year “spiritual journey towards the 500th annniversary of the Christianization of the Philippines in 2021 with different themes for each year.

Devotees—young and old—carried their own images of the Sto. Niño, prayed the holy rosary, and sang liturgical hymns which were broadcast live on radio and amplified by speakers during the “Walk with Jesus” procession and the first novena Mass.

There were no fireworks or balloons along the procession route following an appeal from the Augustinian priests in charge of the basilica to maintain the solemnity of the event and for public safety.

The flower-decked carroza that carried the image of the Sto. Niño arrived at the basilica at 4:55 a.m.

The 3,500-capacity church courtyard was packed, with thousands more staying on the streets outside of the basilica.

In his homily, Fr. Pacifico “Jun” Nohara Jr., the rector of the basilica, said the number of people who woke up early to attend the procession showed the deep devotion to the child Jesus. 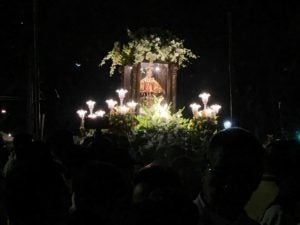 The flower-decked carroza that carries the image of the Sto. Niño. |photo by Marc Cosep

“That’s sacrifice. That’s how we love the child Jesus,” he said.

Nohara, however, expressed hope that one’s longing for God will also lead them to love their neighbors, including enemies.

“Is it enough to attend the novena and Mass in honor of the Sto. Niño? The first reading tells that anyone who says, ‘I love God,’ but hates his brother, is a liar,” he said.

Since the Church in the Philippines is celebrating the Year of the Youth, Nohara encouraged parents to be good role models to their children and for young people to be ready to serve the nation and the Church.

“As sons of God, let us emulate the Sto. Niño. Let us make him our guide to humility and service. (In particular), I hope parents will also serve as guides to their children. Let us remember that young people are the hope of our country. They are our next leaders and evangelizers,” he said.

As part of tradition, the fiesta’s Hermano and Hermana Mayores for 2019–lawyer Paul Yabao and wife Dioscora, were officially presented to the people during the Mass with about 50 diocesan and religious priests as concelebrants.

During the offertory, people waved their hands in the air in unison as they sang “Bato-Balani sa Gugma” (Magnet of love), an ancient hymn in honor of the Sto. Niño.

The basilica complex, which has been the center of the four-century-old devotion to the Sto. Niño, will be open 22 hours from January 10 to 20 to accommodate the multitude of Sto. Niño devotees who come to pay homage to the original image of the Sto. Niño, which is enthroned in a glass case at a side chapel inside the Basilica.

The church will be closed from 9 p.m. to 11 p.m. to allow the janitors to clean the basilica.

Except on January 10 and 18 when there are dawn processions, 11 Masses will be held at the Pilgrim Center every day leading to the feast of the Sto. Nino.

On Jan. 18, a Friday, another prayer walk from Fuente Osmeña to the Basilica will be held to be followed by the Misa de Traslacion at 5:30 a.m. The Sto. Niño and Our Lady of Guadalupe de Cebu images will then be brought to the National Shrine of St. Joseph in Mandaue City in a motorcade.

The annual “traslacion,” a Spanish word which means “to transfer or move,” depicts the “reunion” of the Holy Family — the Child Jesus, His mother Mary and foster father Joseph.

The images will stay overnight at the St. Joseph’s National Shrine. At 2 a.m. on Saturday, January 19, a send-off Mass will be celebrated at the National Shrine of St. Joseph. But unlike the previous years, there will be no more foot procession that will bring the images of the Sto. Niño and the Our Lady of Guadalupe to the Ouano Wharf before the fluvial procession.

Instead, the images will be transported in a motorcade to the Nuestra Señora de Regla National Shrine in Lapu-Lapu City for the 4 a.m. Mass.

In 2018, the Augustinian fathers have decided to extend the annual traslacion from Mandaue City to the adjacent island of Mactan, particularly in Lapu-Lapu City, in response to numerous requests from Oponganons who want to be visited by the images during the festivities.

This year, the fluvial procession will start at the Muelle Osmeña located behind the Nuestra Señora de Regla National Shrine at 6 a.m. From there, a sea voyage across the Mactan Channel will bring the images of the Child Jesus and Mary to Pier 1 in Cebu City.

The Philippine Coast Guard-Cebu is accepting registration of participating vessels, but boat owners will need to register first with the Maritime Industry Authority (Marina).

At 1:30 p.m. of January 19, the grand solemn procession of the Sto. Niño will start, along the city’s main streets.

On Sunday, Jan. 20, the feast day of the Sto. Niño, Cebu Archbishop Jose Palma will officiate a pontifical Mass at 6 a.m. to be followed by eight other Masses. /bjo