No signs of Sabalones in San Fernando since his surrender, says town mayor 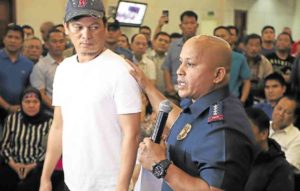 Cebu City, Philippines – San Fernando Mayor Neneth Reluya said self-confessed drug lord Franz Sabalones hasn’t been spotted in her town ever since he surrendered to the police in 2016.

Sabalones, a native of San Fernando, which is 29.3 kilometers south of Cebu City, voluntarily surrendered to then Philippine National Police (PNP) chief Ronald Dela Rosa on Aug. 7, 2016, after he was identified by President Rodrigo Duterte as among those involved in the illegal drug trade.

He was, however, released from police custody after discreetly giving authorities vital details on how his drug group works.

Reluya said since that time, there were no reports of Sabalones being seen in his hometown. She added that the San Fernando’s Municipal Anti Drug Abuse Council also reported no signs of Sabalones’ underlings in the town.

Reluya spoke after all of the policemen at the San Fernando police were ordered relieved on Saturday, January 12, 2019.

Last January 10, San Fernando town councilor Reneboy Dacalos was shot dead in broad daylight in the town. The councilor was linked to Sabalones, an allegation that the slain councilor’s family has denied.

Decalos was the second municipal councilor shot dead in San Fernando in less than a year. Councilor Alexander Alicaway was also killed on March 14, 2018, just meters away from the San Fernando Police Station by two men riding in tandem on a motorcycle. His death remained unsolved.

Reluya said she was grateful to Sinas for the support given to her town. She vowed to continue to support all the campaigns initiated by the police. bjo

Read Next
With Sto. Niño as inspiration, runner who met accident races again in Cebu Marathon