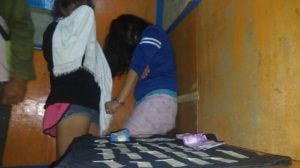 wo women were collared in a buy-bust operation on Tuesday morning, January 15, 2019, in Sitio Mangga, Barangay Tisa. Benjie Talisic

The police identified the two as Lucia Baculi, 47, and Melona Sarmiento, 31, both from the said barangay.

Chief Inspector Keith Allen Andaya, head of the Punta Princesa Police Precinct that conducted the operation at around 5 a.m., said Baculi and her partner were the targets of the operation. Baculi’s partner, however, was able to escape.

Sarmiento is allegedly Baculi’s friend. She was in Baculi’s rented house when the arrest was made.

It was found out that Sarmiento is a maker of siomai (Filipino dumpling) in the area. She claimed that she had nothing to do with Baculi’s involvement in drugs and said she was only inside her friend’s rented house to make siomai.

But the police said they didn’t find anything related to the making of siomai inside the Baculi’s rented house but instead found drug paraphernalia and illegal drugs.

Confiscated during the arrest were two medium-sized packs of alleged shabu with an estimated value of P74,000.

The two are currently detained at the Punta Police Station pending the filing of charges. BJO

Read Next
Have children wear name tags during Sinulog – CCPO