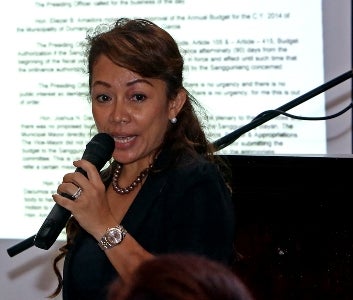 CEBU CITY, Philippines –Despite their differences and disagreements in the past, Grecilda “Gigi” Sanchez , the older sister of Fiscal Mary Ann Castro’s estranged husband, Leodegreco Sanchez, has expressed her condolences to the family of former Cebu City assistant prosecutor who was ambushed and killed  last night, January 18, on Escario Street, Cebu City.

“Nobody deserves to die like that. I offer my sincere condolences to her bereaved family especially her children,” Sanchez said in a statement sent to CDN Digital.

Sanchez said she was  saddened by the news on Castro’s demise.

The full text of Sanchez’ statement is as follows:

I am shocked and saddened by what happened to Fiscal Mary Ann Castro. Nobody deserves to die like that. I offer my sincere condolences to her bereaved family especially her children. It is true that we had disagreements that resulted in the filing of several cases against each other. However, her marriage with my brother was annulled which put to rest issues regarding her claim over my family’s properties. For over a year, coinciding with her transfer to Masbate, nothing had been heard from either of us. As far as I was concerned, everything was okay. Whatever issues we had against each other were brought before the courts because we believe in the judicial processes and rule of law. I sincerely hope her family finds justice.

Read Next
CHR-7 to create team to probe Castro killing