Cebu Archbishop Jose Palma and Cebu Landmasters Inc. officials led by the firm’s CEO Jose Soberano III during the contract signing for the Patria de Cebu development at the 38 Park Avenue showroom at the Cebu IT Park on Oct. 29, 2018. |CDN File Photo

Seeking for an enlightened response from Cebu Archbishop Jose Palma, architect Joseph Michael “Yumi” Espina along with 600 faculty members and students of the School of Architecture, Fine Arts and Design (SAFAD) of the University of San Carlos (USC) signed a petition to save the Patria de Cebu.

The letter was shared on the official Facebook page of Cebu Heritage Society.

A post by anthropologist and columnist Jose Eleazar “Jobers” Bersales, a member of the Archdiocesan Commission on Cultural Heritage, said petition signing is also ongoing at the USC Downtown Campus on P. Del Rosario Street.

In the letter dated January 28 and addressed to Palma, Espina said USC SAFAD has the responsibility to educate students on the importance of heritage conservation.

“We seize opportunities to show our students examples of what can be preserved as heritage structures,” Espina said.

Espina, a noted architect and urban planner, emphasized that the Patria is “equally important” because Fr. Bernard Wrocklage, an SVD priest, was instrumental in organizing the efforts of volunteers and students who worked together to construct the building starting in 1954 as a recreational facility of the Catholic youth.

The Societas Verbi Divini (SVD) or the Society of Divine Word, a Catholic order, administers the USC.

The building is made special because volunteers prayed a “Hail Mary” for each hollow block used in the construction, which earned it the name, “Ave Maria” blocks.

“This effort made by these constituents of the church was upon the imprimatur of the Archbishop of Cebu, Julio Cardinal Rosales,” said Espina.

While there are comments about the building’s existence only made possible by its sentimental value, Espina wrote that the Patria de Cebu is not an ordinary building because “it is a repository of many historical accounts, memories and sensibilities of Cebuanos.”

“We find it disconcerting that the very principles of conservation which we advocate here in school maybe greatly impugned by this contention,” said Espina. 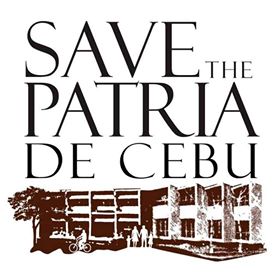 A poster urging the public to “Save Patria De Cebu” is now being circulated by advocates for the preservarion of the 60-year-old edifice owned by the Archdiocese of Cebu that is due for demolition to give way to a high-rise modern building. |Contributed Photo

The petition appealed to Palma to do “your all within your power and influence to prevent the demolition of our Patria de Cebu.”

“Losing another cultural treasure during your watch as our (arch)bishop will be a big disappointment to the USC community,” said Espina.

In October 2018, Cebu-based real estate developer, Cebu Landmasters Inc. (CLI) signed a lease agreement with the Archdiocese of Cebu for a P900-million redevelopment of Patria de Cebu, a 6,670 square-meter property located across the Cebu Metropolitan Cathedral.

It announced the deal to the public with CLI announcing that the Patria de Cebu property will be transformed into a mixed-use development with an “integrated retail, office and hotel structure with a Rome-inspired plaza.”

The transformation means tearing down the entire structure, which is more than 60 years old.

Heritage advocates, particularly from the Archdiocesan Commission on Cultural Heritage, has called on both the Archdiocese and CLI to preserve the main façade of the building.

Bersales, who is also a member of the heritage commission and curator of USC Museum, previously wrote that the front or main façade of the building can be retained along with its lobby and the wings to serve as a visitor information center or a mini-museum about the history of the Patria.

“It can even serve as a kind of welcome façade for the planned piazza behind it that is supposed to link all three buildings proposed by the CLI,” wrote Bersales.

Architect Melva Rodriguez-Java, a staunch advocate of preserving the Patria de Cebu, resigned from the Commission in opposition to the CLI plan.

Meanwhile, Palma remained determined to continue with the CLI partnership and plan to demolish the existing building.

The Archbishop previously stated that the Patria de Cebu is not considered by the Church as a heritage structure.

The matter has been brought up to the National Historical Commission of the Philippines. Article 3, Section 5 of Republic Act 10066, or the National Cultural Heritage Act of 2009 notes that structures dating at least 50 years old shall be considered important cultural property and are protected against exportation, modification or demolition./elb