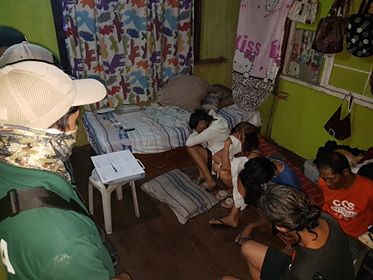 Five persons, all from the same family, hide their faces after agents from the Philippine Drug Enforcement Agency in Central Visayas (PDEA-7) raided their house being operated as a drug den in Barangay Lorega San Miguel, Cebu City past 10 p.m. of Feb. 15, 2019. |CDND Photo/Benjie Talisic

The operation, led by agent only identified as Toto and supervised by PDEA-7 regional director Wardley Getalia, resulted to the arrest of house owner Maribel Mendoza Ilaga, 57, who allegedly ran the drug den with her son, BJ Ilaga, 22, who was also arrested in the same operation.

Also taken into custody were Johann Ilaga, the brother of Maribel; Emabel Celerio, 35, the niece of Maribel; and Ramon Legazpi, 40.

Several sachets of shabu valued at about  P74,600 were seized during the operation, the PDEA raiding team said./elb