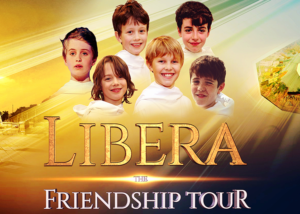 An all-boy English group comes back to the Philippines in Cebu for its Friendship Tour on February 23, 2019 at the Waterfront Pacific Grand Ballroom in Salinas Lahug, Cebu City. Before the concert, meet and greet the boys with angelic voices at the Mountain Wing Atrium of SM Seaside City Cebu on February 21, 2019 at 6PM.

Some of the boys who joined Libera mostly came from the Anglican(High Church) parish of St. Philip’s, Norbury. The choir’s first non-traditional commercial work started in 1984 and later released their single, Sing Forever in 1987.

The music of Libera has a distinctive sound composed of boy soprano voices; the members in their early teens would sing compositions of Robert Prizeman where their voices blend in innovative textures with vibrant chorus harmonies.

Libera Friendship Tour is dedicated to all its Cebuano fans who are in love with the sound of peace and relaxation; get a chance to win tickets to their concert for a minimum receipt of Php100 purchase at SM Seaside City from February 20 to 21 and present it during the Libera meet and greet, which is open to the public.