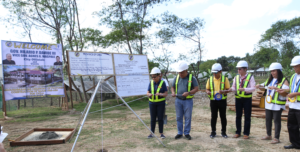 Cebu Gov. Hilario P. Davide III and Vice Gov. Agnes A. Magpale led the groundbreaking of a P10-million facility intended for children in conflict with the law (CICL) in a Province-owned lot in Barangay Inayagan, City of Naga on Thursday, Feb. 21.

This two-storey facility, which is expected to be completed within 157 calendar days, is a 24-hour child-caring institution that will be managed by the Capitol, through the Provincial Social Welfare and Development Office (PSWDO), in partnership with the Juvenile Justice Welfare Council (JJWC).

Magpale, who co-chairs the Provincial Women’s Commission and the Provincial Council for the Welfare of Children, said that the construction of the Bahay Pag-asa is a dream come true for all the advocates of children’s rights.

The vice governor said that the project in Naga will serve as the second facility for CICLs, as the first one is located in the northern town of Consolacion, which is called My Home. 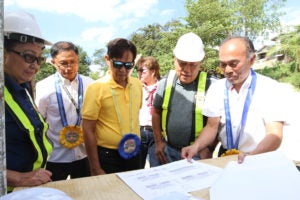 The Justice Peace and Integrity of Creation-Integrated Development Center Inc. turned over the management of My Home to the Cebu Provincial Government in 2013, Magpale said.

Davide, in his speech, said that the Province of Cebu has dedicated as one of its priority programs the protection and welfare of children.

She said that the Province has allocated a budget of P10 million for the Phase 1, while the JJWC also pledged P10 million to help for the completion of the project’s second and third phases.

Yes Construction won the bidding for the project’s phase one, which will be constructed inside a 2,000-square-meter compound.

In October 2018, the Cebu Provincial Government and the Department of Public Works and Highways 2nd Engineering District, which is the implementing agency, signed a memorandum of agreement for the implementation of the project by contract.

The groundbreaking ceremony was witnessed by various government and non-government organizations as well as the local officials of Inayagan.