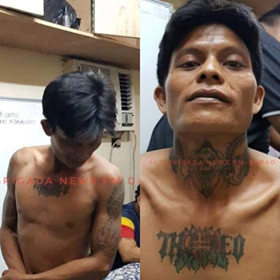 CEBU CITY, Philippines — Jonas Bueno, one of Cebu’s most wanted criminals and a “person of interest” in the gruesome murder of sixteen-year-old Christine Lee Silawan, was arrested by operatives in Davao City in Mindanao past 5 p.m. on Friday, March 15.

Chief Inspector Milgrace Driz, head of the Criminal Investigation and Detection Group (CIDG) in Davao City, confirmed this to Cebu Daily News Digital.  It was a joint operation conducted by the CIDG-Davao City, National Bureau of Investigation in Davao Region, and the Mindanao Area Intelligence Office.

However, Driz said Bueno’s arrest is related to “another case,” and not the one involving the murder of Silawan from Lapu-Lapu City.

“It’s related to another case. May standing warrant of arrest siya for murder,” said Driz in a phone interview.

But the CIDG-Davao City chief was not able to elaborate further, stating that she is still granting media interviews in Davao City at that time.

On the other hand, enforcers from Carmen Police Station in northern Cebu are yet to receive official information that the town’s most wanted criminal is now under police custody.

SPO1 Roy Cabahug told CDN Digital in a separate phone interview that Bueno has a standing arrest warrant for robbery and murder in 2016.

Cabahug said Bueno killed and stole the harvest of an elderly farmer in Barangay Sac-on, Carmen town sometime in 2016.

Jonas and his two older brothers identified as Junrey and Jovie, topped Carmen’s list of most wanted criminals, and are collectively known as the Buenos Brothers.

The Buenos Brothers gained notoriety for reportedly killing farmers in the hinterland villages of Carmen town and the neighbouring city of Danao if the latter refused to give their harvest to the brothers.

They were also accused of killing Trinidad Batucan, a 62-year-old farmer in Danao City last January. Batucan’s face and neck were skinned to the bone, a mutilation that was strikingly similar to what happened to Silawan.

A shootout occurred between enforcers from Danao Police Station and the Buenos Brothers in Danao City days after Batucan’s corpse was found. The incident resulted to the death of Junrey and Jovie.

Silawan’s body was discovered in a grassy vacant lot in Lapu-Lapu City half naked, brutally mutilated, most of her face skinned, her throat slit and her tongue missing. She sustained 20 stab wounds and nine defense wounds, police said.

An Inquirer.net report said that Bueno reportedly fled to Davao City after the crime to work in a construction project in Matina Pangi village here several days before his arrest on Friday. He is now in now under police custody.

Different groups have raised at least P2 million for the arrest of the suspects in Silawan’s gruesome murder./elb