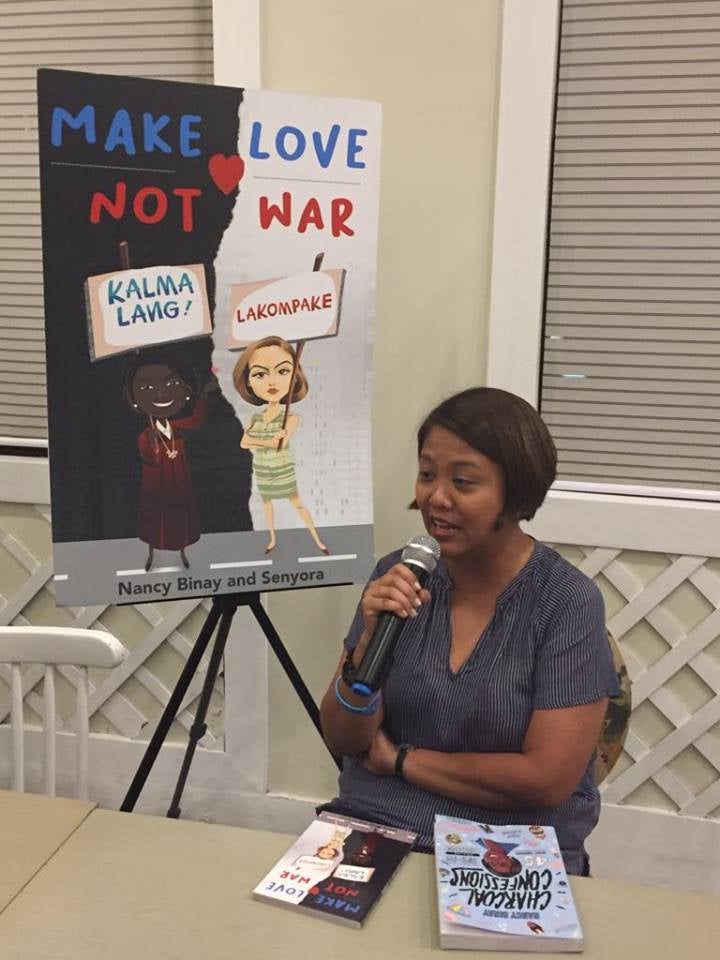 CEBU CITY, Philippines–“Accept and love your flaws so no one can use it against you.”

This was  one of the many advises that Senator Nancy Binay wrote on her book “Make Love Not War” to make people like her, who are often bashed on social media, deal with insults.

Binay said that bashing is something that she would often experience even after she was elected senator in 2013 because of her skin color and the clothes that she would wear in public gatherings, among others.

But instead of feeling bad, Binay said that she has learned to deal with her social media bashers.

“I can’t control kung ang ang sasabihin ng ibang tao but I can control how I react,” she said in a press conference held in a Cebu City restaurant, Monday night.

Through her book, Binay said she wanted to share especially with the millennials her own experiences on social media bashing and how she dealt with these.

Her book, which she co-authored with social media celebrity Senyora Angelika Santibañez and in collaboration with ABS-CBN Publishing, was formally launched in Manila during the first week of December 2018.

In the book, Binay and Senyora shared tips on how to deal with social media bashing.

Binay said she draws her comments from her personal experiences as she has been a favorite target of bashers while numerous critical memes have been created about her.

The senator also urges readers to focus on positive posts on social media.

“If you dwell more on doon sa mga naninira sa ‘yo at nangba-bash, you will treat social media as a toxic place,” she adds.

Binay said that her book is now the sixth best selling books placed on display in all National Bookstore outlets in the country. She is hopeful that this would eventually land on the number one spot.

Sold at P185 each, Binay said that she wanted proceeds from her book sales donated to babies with biliary atresia, a rare disease of the liver and bile duct.

Binay said that promoting her book is like taking a quick break from her campaigning. But she admitted though that her book’s popularity has also helping her politically.

Even her campaign advertisement which dealt with her being called “kulay uling”  seemed to have worked to her advantage.

Following the success of her “Make Love Not War” book, Binay said that she would also be launching soon her second book called “Charcoal Confusion” that also discusses social media bashing.

Binay said that the book was published ahead of her “Make Love Not War” book but it was never officially released into the market.

She will just to make a few revisions before she would launch the book in time for her 46th birthday on May 12.

Read Next
Nuggets clinch playoff spot with win over Celtics