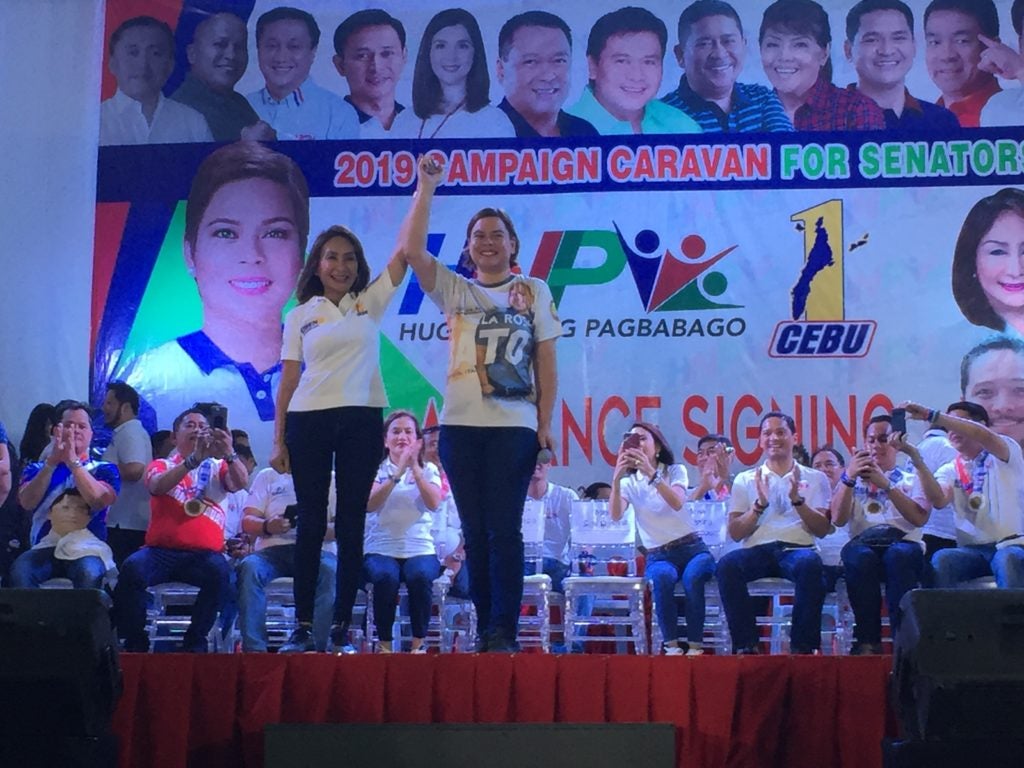 Presidential daughter and Davao City Mayor Sara Duterte-Carpio raises the hand of Cebu Third District Representative and gubernatorial candidate, Gwendolyn Garcia, during the Alliance signing of memorandum of the Hugpong ng Pagbabago (HNP) and One Cebu at the Panphril Frasco Gym in Liloan town, Cebu, on March 22, 2019. | Delta Dyrecka Letigio

Garcia said in a press briefing on Friday, March 22, that she was lucky to have both Dutertes’ support for her gubernatorial bid in the May elections.

She said that the endorsements especially with the Alliance Signing of Memorandum between Duterte-Carpio’s Hugpong ng Pagbabago (HNP) and Garcia’s One Cebu, at the Panphril Frasco Gym in Liloan town, Cebu on Friday, March 22, would make her run for the governor of Cebu even stronger.

She said that the raising of her hand on Friday would be a “proof” and “commitment” that the younger Duterte had chosen her (Garcia) over the “other” (Magpale) in the gubernatorial race in Cebu.

On the request of Duterte-Carpio to Garcia to produce campaign materials for HNP since the party only had limited resources, Garcia said she “can deliver.”

“With this alliance with HNP, we commit to deliver and show our support to the chosen senatorial candidates of HNP, precisely because One Cebu has always supported the President. These candidates would be the strong voices of the President in the Senate,” said Garcia.

Garcia clarified that the alliance between HNP and national party, the National People’s Coalition (NPC), which in turn is in alliance with One Cebu’s opposing party, BAKUD, had been restricted to the national level.

She said that the HNP-NPC alliance would only be for senatorial candidates, which would entail the NPC to endorse the senatorial slate of HNP.

However, according to Garcia, this alliance does not extend to the local candidates endorsed by NPC among their own local allies.

Garcia said that unlike the HNP-NPC alliance, One Cebu was a local party and the support given by HNP would carry to all candidates running under One Cebu.

Garcia also said she was confident that One Cebu could deliver the votes of Cebu to the senatorial candidates of HNP since in the last Presidential elections, they were able to provide a 4 million margin of votes for President Duterte in 2016. /dbs